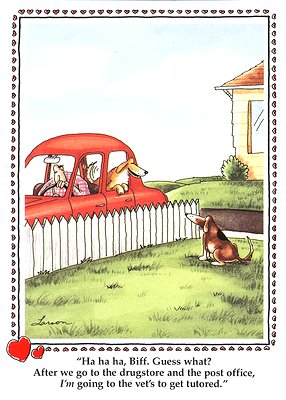 "Republicans understand the importance of bondage between a mother and child."
Dan Quayle, former US Vice President

"It's nice to go widow shopping at Christmas." - Mick from "Mick's Page"


"After a long air flight, it is reassuring to get your feet back onto terracotta." - Libby (from The Midlands)

"A triangle with all its sides equal is called an equatorial triangle." - Daphne Franks

"I don't understand. You need to be a bit more pacific."  - Helen (Brisbane)

"It'a a long play but there's an intercourse in the middle." - Earl John Gray

"If you swallow poison, you should take an anecdote." - Mountain Thyme (Colorado)

"One of my favourite songs is Michael Rode the Girl Next Door" -Brian (Catalonia, near Spain)
- November 28, 2012