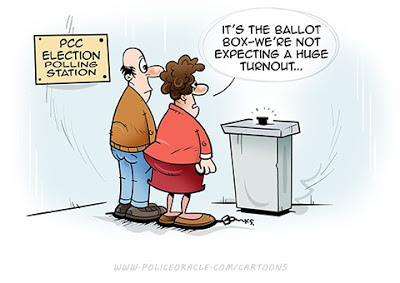 Yesterday, polling stations were open across England and Wales for the election of our first local Police and Crime Commissioners. The turnout was utterly abysmal - testament to the electorate's justifiable suspicions and disinterest in the whole expensive affair. This is the first election I have refused to participate in, viewing my non-participation as a suitable sign of disapproval. Around the country, turnouts appear to have ranged between 7% and 19% and in the city of Coventry, for example, many voters simply spoilt their ballot papers. The BBC report that some polling stations attracted no voters whatsoever  - empty ballot boxes.

Hi-jacked by political parties, in my estimation the bandwagon has taken precious funds away from police forces. The Commissioners with their offices, support staff and generous expenses will each cost the nation around quarter of a million pounds a year. That's a hell of a lot police officers' salaries.

Over in Hull, it is likely that former Deputy Primeminister, John Prescott (aged 74) will become that area's first commissioner. I don't wish to appear ageist but in the majority of occupations people of seventy four have retired long before - in their early sixties - if not before. Why should Lord Prescott be any different?

The bottom line is that the neverending battle to uphold the law and suppress criminal activity costs money - lots of it. When funds are cut back, the basic task of any police force becomes more difficult and "democratically elected" commissioners will have no impact whatsoever in achieving more effective policing when funds are constantly being eroded by the same Westminster government that came up with this stupid idea.