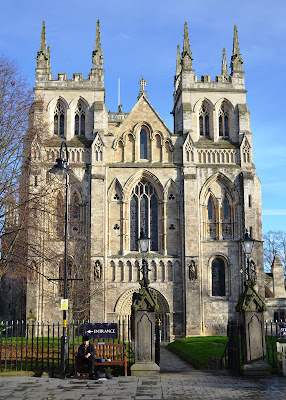 In "Yorkshire Rambles", the cult international TV programme, your roving reporter visited the town of Selby yesterday. A very different place from Thurcroft, it sits on a bend in the River Ouse, some fourteen miles south of York.

Shirley's sister Carolyn lives nearby and we were paying her a day visit which would include a trip to Selby - birthplace of King Henry I. They were looking forward to shopping but I just wanted to look round the town's ancient abbey It was founded in 1069, though Vikings and Saxons had occupied the abbey site long before that.

It was a splendid day to view the old abbey with sunlight streaming in and very few other visitors in attendance. What an amazing building! Gnarled like an old oak tree, it has many stories to tell and is arguably one of  England's best kept secrets. So shh! Don't tell anybody else.

High up in the south clerestory, I noted the famed Washington Window containing the heraldic arms of the same Washington family that produced the first president of the USA. The glass is fourteenth century.When Glover the Herald visited Selby in 1584-5 he described the escutcheon as 'Argent, two bars and in chief three mullets pierced, gules'. 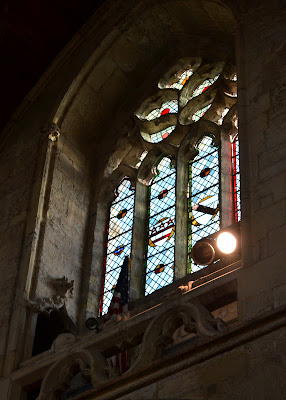 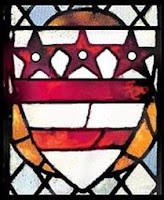 The 14th century Washington coat of arms contains three stars above red and white stripes, and is one of the first known representations of the stars and stripes pattern later used for the US flag. The window is thought to commemorate John Wessington, Prior of Durham (1416-1446). Because of this  Washington connection, Selby Abbey is on the 'American Trail' of attractions around the UK with strong American historical connections.

Other noteworthy contents include the magnificent fourteenth century stained glass window directly behind the altar - The Jesse Window. It tells the story of Jesus's lineage and is testament to the skill and patience of long forgotten medieval craftsmen. Below you can see a section of the window and in the next picture you can see the Jesse Window looming behind the intricately carved wooden altar:- 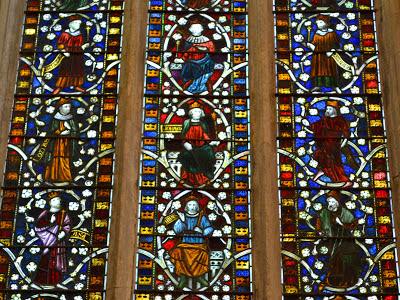 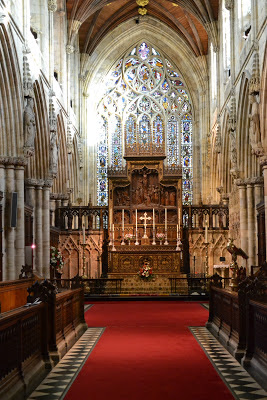 Something else that caught our eye was a feature called the "Lepersquint" which was essentially a hole in the thick limestone north wall that allowed medieval lepers to stand outside the church and look in towards the altar. They could thereby participate in religious services without infecting healthy townspeople. I imagine the lepers pushing and shoving each other to get a look in as bits of their bodies fell off..."I'd give my right arm to look through that lepersquint!" 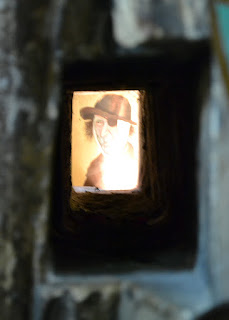 We stayed for an hour or so and then Shirley and Carolyn went shopping while I strolled out of the town centre, taking in various sights and outside some Victorian almshouses I chatted to a ninety two year old resident who was waiting for her seventy year old daughter to arrive to undertake a few "messages".


Selby felt like a town that is proud of itself. There was hardly any litter or graffiti and the main shopping streets had not been taken over by charities. People seemed cheerful and well-heeled as they went about their business and in "Mr C's Fish Restaurant" we were greeted warmly by the staff before sitting down to one of the most popular and traditional English meals - battered cod and chips (fried potato fingers) with mushy peas, buttered bread and a fresh pot of tea.

Here's Shirley and Carolyn in front of the magnificent Norman west door of Selby Abbey:- 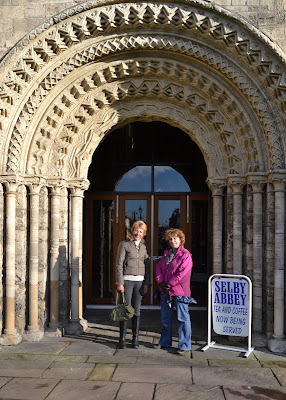