The Pathé company was founded as Société Pathé Frères in Paris on 28th September 1896, by the four brothers Charles, Émile, Théophile and Jacques Pathé During the first part of the twentieth century, Pathé became the largest film equipment and production company in the world, as well as a major producer of phonograph records.

In 1910, Charles Pathé was the brother who conceived the idea of the Pathé News Service which became a vital feature of the British cinema experience from the nineteen twenties right up to 1970. In an age where people did not have access to twenty four hour news and faraway places seemed, well, very faraway, Pathé interpreted what was going on both nationally and internationally. Sometimes, right wing political bias is very evident in the company's descriptions of workers' industrial action and there is often a paternalistic or propagandist air about the commentaries but there is no doubt that for forty years Pathé had a huge impact upon the British people's understanding of the world they inhabited.

Recently, I have enjoyed exploring a range of clips from the British Pathé online library. I have seen my football team - Hull City in training in 1935. I have seen the East Coast floods of 1953, the funeral of Winston Churchill, Pablo Picasso arriving at Sheffield City Hall for a World Peace Conference and The Beatles first arrival in America. To visit the Pathé website click on the perky cock below. If you are interested in modern history or simply inquisitive, you will not be disappointed:- 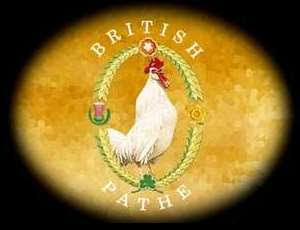 And just as a "taster", here's a somehow disturbing "human interest" item from 1935. I wonder whatever happened to the unfortunate Leslie Bowles - the "ten stone baby" and why don't English newsreaders talk like that any more?
- November 12, 2012