Early morning Christmas Day. Not sure why I couldn't sleep. Perhaps the takeaway curry from "Hamid's" or the drinks at John and Lorraine's house. More likely a phantasmagoria of Christmases past. Mum and Dad and my brothers. Or Ian and Frances as small  children - "He's been! He's been!" The eager anticipation of gifts. An annual marker in the continually running sands of time. Christmas Day.

I lay there willing myself to sleep again but it just wouldn't happen. So I am downstairs with a big mug of tea and a mince pie but as I lay there trying not to disturb my Shirley, I recalled a story I wrote a month ago. It was inspired by the London Underground and it tells the tale behind the name of  a certain tube station. And that station is... 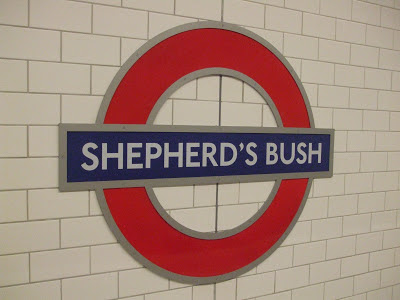 Long ago, before motor cars and mobile phones, before aeroplanes and factories, before computers and microwave meals, a shepherd lived near the little town of London. His name was Humphrey and his humble home was  a little shepherd’s hut made from willow sticks and  the old bones of dead sheep. Instead of a carpet, he just scattered dry hay on his dirt floor.

Humphrey was employed by Lord Snotgrouse of Hammersmith who had a luxurious mansion by the River Thames – on the very site of what is now the Hammersmith Apollo Theatre. You might have seen it on the television -  the Apollo I mean – not Snotgrouse Mansion which was demolished early in the nineteenth century as London spread its urban tentacles into the surrounding countryside.

Lord Snotgrouse and his house guests loved to eat meat. He insisted on meat at every meal.  And because in those days there were no supermarkets or even any high street butchers, rich people had to raise their own animals. Lord Snotgrouse always had important things to do so had no time to look after his own animals. Instead, he employed a swineherd, a cowherd, a poulterer (keeper of chickens), a rabbit catcher and a shepherd. It was their job to make sure there was an endless supply of freshly slaughtered animals for the kitchens of Snotgrouse Mansion.

Humphrey shepherded a flock of around a hundred sheep. Every day he’d rise before dawn, put on his woolly jerkin and his sheepskin hat, grab his spindly shepherd’s crook and venture out to check the flock. He’d move them to new pastures or down to the River Thames to drink and all the time the stupid sheep say would  say “baa!” – all of them together, a hundred sheep going “Baa! Baa! Baa!”. They made a helluva racket and the noise often woke other residents on Lord Snotgrouse’s vast estate.

Day after day, Humphrey tended the flock. In summertime there were fleeces to shear and In springtime there would be new lambs to keep up the numbers as older sheep were swiftly dispatched with Humphrey’s sharp steel  knife. He kept it in a leather sheath that hung from his belt. It had been handed down to him by his father. When a sheep was dead, Humphrey would sling it over his shoulders and, grasping its dangling feet, carry it along the network of country paths that led to Snotgrouse Mansion.

Humphrey never had a day off. For forty years he worked without a single holiday. He didn’t even have time to go to church in the nearby village of Fulham. He tended Lord Snotgrouse’s sheep from dawn to dusk, 365 days a year and sometimes he’d even be up in the middle of the night, assisting ewes with their lambing or chasing away foxes that loved to feast on fresh mutton. Yes, Humphrey did his duty. He served his lord without complaint and maintained the supply of fresh sheep for his lordship’s kitchen.

In all this long time, Humphrey had never even spoken to his master though he had often seen Lord Snotgrouse riding Bombast - his big grey horse towards the little town of London or to nearby  Fulham village. The rutted track that led there went right past Humphrey’s humble hut.

When Humphrey was a young man of twenty five or so, he was guiding the flock along the bumpy track to fresh pasture when Lord Snotgrouse rode by on Bombast. It had been raining that morning and as his lordship trotted by, his horse’s hooves splashed in the muddy puddles along the way. Humphrey stood on the grass verge and bowed his head, close to a particularly large puddle. When Bombast’s front hooves hit it, Humphrey was splashed from head to foot with muddy brown lane water.

Lord Snotgrouse looked down from his saddle. He was a tubby man with fat cheeks and  thighs like hams. Seeing poor Humphrey standing there dripping with mud and chocolate-coloured water, his lordship roared with mirth – “Ha! Ha! Ha!” till there were tears of laughter running down his blubbery face. Then he whipped his grey horse’s rump with a leather riding crop and galloped through the baah-ing sheep still laughing with cruel delight at Humphrey’s misfortune. Meanwhile Humphrey, wiping away the muddy water, had to regather his now scattered flock as he watched the diminishing figure of his greatly amused master making his way along the old farmtrack  to Fulham and thence to London.

Years passed. Sheep came and went and Humphrey grew older. One dark November night, he lay shivering in his shepherd’s hut beneath an old sheepskin blanket he had stitched together when he was a young man. Wind and rain howled together outside and he was glad that he’d taken the flock to the old sheepfold that he and his late father had built over at Kensington. They were sheltered from the worst of the weather there.

Rain bucketed upon Humphrey’s roof and outside the thunder rumbled. Then he heard a horse on the nearby lane – its hooves pounding like coconut shells. Suddenly, there was an enormous crack of lightning that must have lit up the entire parish. He heard the frightened whinnying of a horse and then a man’s voice – “Steady Bombast!”. There was another explosion of light. The man yelled “Aaargh!” and there was a heavy thump as the horse galloped off down the lane at a hundred miles an hour.

Even though the rain was still lashing down, Humphrey got up to see what had happened. He put his sheepskin blanket over his head and ventured down to the lane.  There was something there – like a sack of turnips, just lying in the road – and then in another blinding flash of lightning, he realised that it was the crumpled body of his master – Lord Snotgrouse, just lying there as dead as a doorpost. He surely must have hit his head on a rock or tree root when the horse threw him.

But Humphrey didn’t know for sure that his master was dead so he dragged his lordship back to the little hut and laid him on his humble bed in his humble shepherd’s hut where he lit his only remaining candle stub. Then it became clear that the bloated nobleman’s life had ceased. Humphrey surveyed his flabby body, noting the fine silk pantaloons, the braided velvet jacket and the shiny shoes with golden buckles. And suddenly - there on his lordship’s belt he noticed a calfskin money bag. It appeared to be bulging with coins.

Humphrey knew it was wrong but he couldn’t help himself. He untied the money bag and poured out its contents. Good heavens! There must have been fifty guineas or even more – in gold and silver coins. Humphrey was astonished. As a shepherd, he earned a solitary threepenny bit a week with an extra sixpence at Yuletime and here on the floor of his hut was an absolute fortune. If it was his it would be like a modern day person winning the National Lottery with their six magic numbers!

Humphrey was tempted. A demon inside in him said “Take the money!” and he listened to that demon rather too hard as the little angel’s voice inside him was reduced to a tiny whisper – “No Humphrey! It’s wrong!”

The storm was passing by now. Hanging next to Humphrey’s door was an old spade that he had once used to dig the foundations of the sheepfold at Kensington and sometimes used to crack trapped foxes’  heads. He took it down and dug a hole a few yards away from his hut. It was a man-shaped hole. The soil was stodgy with rainwater but after three hours of digging and with dawn beginning to lighten the eastern horizon, the hole was done.

He went back inside the hut and grabbed his lordship’s feet – buckled shoes and all and he dragged the fat corpse outside to the hole which seemed to fit Lord Snotgrouse nicely. He landed at the bottom with a heavy wallop then huffing and puffing, Humphrey refilled the hole, stamping the earth down with his sheepskin boots. “Ug! Ug!” he grunted with the physical effort of the awful job he had just finished.

Then Humphrey went back into his humble hut and counted the coins from the leather moneybag. Sixty two guineas, four shillings and ninepence! He counted it again. Yes – he had been right first time! A flaming fortune! His eyes bulged with excitement. And then he boiled some thin sheep’s head gruel before beginning yet another day as a country shepherd - as if nothing out of the ordinary had happened.

He heard from Dave the swineherd that his lordship’s grey horse had been found down by the river. Rumour had it that his lordship must have been tossed into the Thames during last week’s thunderstorm. Perhaps Bombast had panicked and thrown him.  By now the tubby lord’s  body could easily have been washed out to sea.

A week or so  later, some redcoats passed along the lane, returning from Snotgrouse Mansion. They had been making enquiries about his lordship’s disappearance. As they reached the old shepherd’s hut, they saw an old man planting a Yuletide hollybush next to his humble home.

The captain yelled out, “I say old fellow, did you see Lord Snotgrouse on the night of the storm?”

“No sir. I were sound asleep in my bed. I heard nothing. Nothing at all,” lied Humphrey looking down humbly at the blade of his old spade.

After the redcoats had galloped away – back to their barracks in London – Humphrey tamped down the little hollybush with the heels of his boots. He had planted it directly over the place where Lord Snotgrouse was buried.

In the next few years, that hollybush thrived, growing to twenty feet or more and every Christmas its branches bulged with bloodred berries. Passers by sometimes stopped to admire what became such a fine bush – right next to the old shepherd’s shack. But Humphrey never saw  his shepherd’s bush flourish for just days after the redcoats had ridden by,  he put the calfskin moneybag inside his sheepskin jerkin and began what turned out to be a very long walk to the south coast.

He arrived in the seaside village of Brighton on Christmas Day where he took lodgings in “The Three Tuns Tavern” and ate a hearty meal of roast swan, boiled turnip and tender mutton. Then he bought “drinks all round” for the other Christmas revellers who, taking Humphrey’s lead, toasted “his lordship” before Tom the fiddler played Christmas carols on his violin deep into that frosty night.