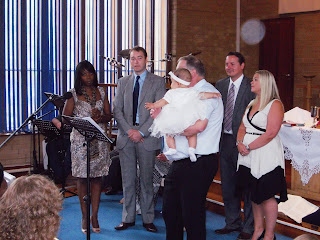 Remember little Alexa - born in Bangkok at Christmastime? Well yesterday was a special day for her - a welcome into the Baptist Church - something like a Christening but without water. This happened in the Birmingham suburb of Bearwood. It was nice to see the little princess again - see how she's growing with her parents, friends, family and church congregation around her. Such events predate Christianity.

On Saturday night I stayed in the "Holiday Inn" near Junction 7 of the M6 following another marvellous  walk. This time I had been rambling over Cannock Chase south of Stafford. It is an area of mixed countryside - heathland and woods covering thousands of square acres. It has a rich history - once a royal hunting ground and much later a vast military base containing training camps and hospitals - linked to both world wars.

Shall I recall the grave of Freda the Dalmatian - mascot of the New Zealand Rifles in 1918, or the Polish Katyn Memorial to those thousands of soldiers killed by Stalinists in a Polish forest in 1940? Or shall I recall the deer I surprised in a quiet glen near Coppice Hill? Perhaps the Commonwealth War Graves cemetery at Broadhurst Green or the huge manmade sandbanks where soldiers trained before heading off to be slaughtered in the trenches of northern France?

No, I believe I'll remember the German Cemetery where the remains of thousands of young Germans lie - brought to Cannock Chase from all over the British Isles - victims of both World War I and World War II. Forgotten parachutists, prisoners of war, enemies who died in military hospitals, spies, men washed up on beaches, the crews of two Zeppelin airships etc.. They lie together in a quiet corner of Cannock Chase - far from any houses or villages, far from Deutschland silently sleeping with their unrealised dreams, their lost years. And for what? Wars are made by leaders who hardly ever fight or die in action. It's ordinary people who bear the brunt of the lunacy:-
May they all rest in peace and help to remind leaders of nations that there must be other ways to solve conflicts. War is not the way.
- July 22, 2013