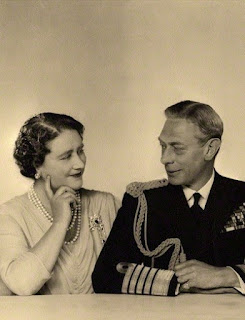 When King George VI and Queen Elizabeth visited Sheffield and the Upper Derwent reservoirs in late September 1945, it was just three weeks after World War II had officially ended. They rode in an open topped black car along Fulwood Road and through Broomhill where thronging crowds cheered them, no doubt still mightily pleased that war was at last over.

Mistress Jan Blawat of Wesley Mansion, Sloughhouse, California was disgruntled that I did not post a picture of the King's Oak to accompany yesterday's post. I had mentioned it in the text - a commemorative tree planted by King George and his queen on September 25th 1945 close to the head of Howden Reservoir. Not wishing to upset or offend the feisty Ms Blawat, I shall now make amends. Here it is without its summer clothes:- 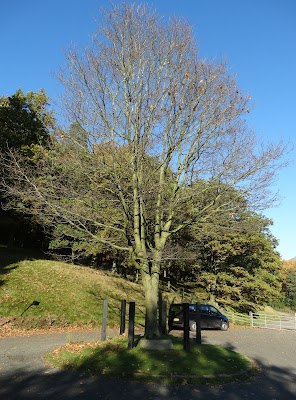 It is not the most impressive of trees. I doubt that its situation is the best for English oaks - in a deep and often shady valley that can be bitterly cold in the wintertime - but at least it is still growing. Being the obsequious kind of fellow I am I wished to please Mistress Blawat further by finding a picture of the original planting ceremony but I was sadly unsuccessful. Nonetheless, here is the tree in 1946 - a few months after it was planted:- 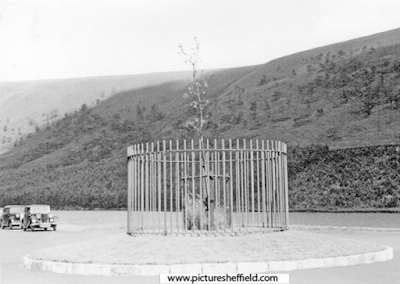 The railings have gone - probably pilfered by an unscrupulous scrap metal thief in the dead of night. I also notice those bare hillsides that are now clothed under plantations of lofty pine trees. Lower down the valley at the bottom dam - called  Ladybower - the king ceremoniously unlocked the ornamental gates that still stand today even though I notice that those impressive bronze shields have gone. That damned scrap metal thief again! 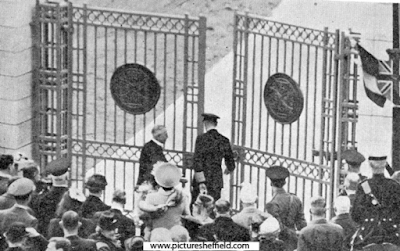 It crossed my mind to write a spoof speech by King George in which he almost painfully stammered and stuttered out his sentences - purely for your entertainment but then I thought better of it. After all, speech defects are not really funny and having a stammer is a kind of disability. Just as it would be wrong to make fun of paraplegics or blind people so it would surely be in very bad taste to poke fun at stammerers. I taught a few over the years and shared in some of their struggles.
- November 05, 2015