In 1970, I moved to Beverley Grammar School to begin my A level studies. My subjects were English, Geography and Art. My art teacher was known universally as TAD for those were his initials - Mr T.A.Doyle.

Very early on, he instructed me and my classmates to design and paint a new book cover for "Around the World in Eighty Days". I had the simple idea of a biplane pulling a banner around the globe and on that banner the name of the book would be spelt out.

I worked diligently on my initial painting and after two double lessons proudly presented my effort to Mr Doyle. He looked over the rim of his silver framed spectacles, silently perusing what I had done and then looked up at me saying, "That's a very good rough draft Neil."

For a moment I was flabbergasted. But I took my work back to my bench, rolled up my sleeves and started anew. Rough draft! Rough draft? A week later I had produced a much more careful version of my design and this time Mr Doyle approved of it. His initial judgement had spurred me on to achieve a better standard and this was clear to see when placing the first effort alongside the second attempt.

Last week I made a blogpost about pheasants and two of my American blogging friends - Donna (aka Mama Thyme/Mama Bear/ Big Sis) in Colorado and Jennifer in Florence, South Carolina challenged me to have a go at painting a pheasant picture based on one of my photos. This was the photo I chose:- 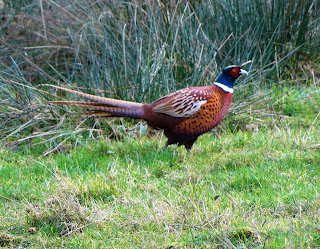 Last evening, using a mixture of watercolour crayons and paint, I produced this:- 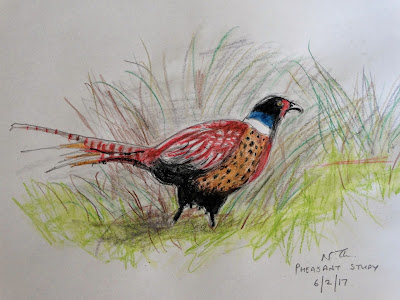 But it's only a rough draft, not the finished picture. After all, Mr Doyle is still watching me.
- February 07, 2017