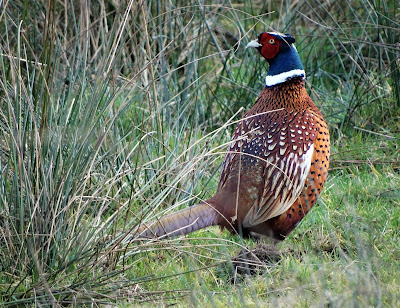 Out walking in the nearby Mayfield Valley this afternoon, I was startled by a cock pheasant. He squawked from undergrowth at the side of the path before running off. I have had similar surprises many times when out rambling. In the English countryside, pheasants seem to be everywhere.

I always think of common pheasants as particularly stupid birds which is probably a tad unfair. The male of the species has beautiful plumage while the female's dun feathers are designed for camouflage. The fact that they have been able to spread across our green and pleasant land demonstrates that they are not as dumb as they appear. 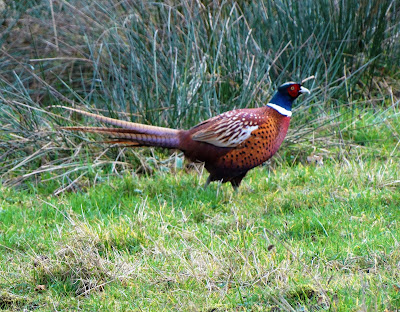 Pheasants are not native to The British Isles. Originally, they were confined to eastern regions of Asia. It is not known for certain how they arrived on our shores but generally it is believed that they were brought over during the Roman occupation of Britain. Perhaps Roman soldiers simply wanted to supplement their monotonous diets. They also introduced rabbits and sweet chestnuts.

Thousands of pheasants are shot every year by bloodthirsty field "sports" enthusiasts armed with shotguns. Though there's not a large amount of meat on your average bird, roasted pheasant is certainly tasty. In spite of the widespread annual killing, our country is still home to millions of pheasants. Plenty are specially bred for shooting but many thousands survive in the wild.

As I walked along Mark Lane by Mill View Farm, I spotted a second cock pheasant in a tussocky field up wind from me. He didn't spot me as he strutted nervously, sometimes stopping to observe his environment and to emit his characteristic chortled echo of a mating call. Naturally, I took the opportunity to shoot... some photographs.. 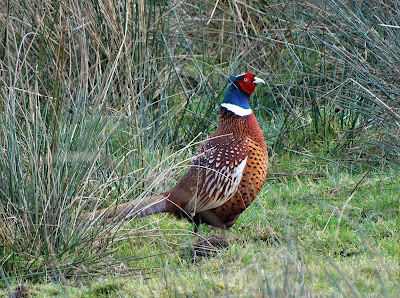