Very occasionally, I check out Blogger "stats" in relation to this humble blog. It's always interesting to see where one's "traffic" is coming from. Here you can see the Yorkshire Pudding state of play yesterday evening:- 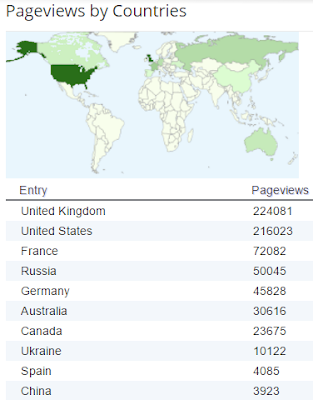 Unsurprisingly, top of my league table comes Great Britain (i.e. "United Kingdom"), closely followed by The United States in which an adulterated form of English is widely spoken. No surprise there then and for the same reason it's no surprise that Australia and Canada are also in my top ten.

However, look at the countries coming in at three, four and five - France, Russia and Germany. I am especially surprised about France as in that Gallic nation, the French language is the preferred means of communication and this blog is of course almost exclusively written in English.

Pausing for a moment, it has just dawned on me that French people will read this very post. Being a stickler for good manners, I should like to take this opportunity to say "Bon Jour!" to all my French visitors and "merci beaucoup" for visiting "Pudin de Yorkshire".

Though obviously not as nice as Yorkshire, France is in my view a great country. Your wine is third only to wine from New Zealand and Australia. Your cuisine is pretty good too though personally I prefer a nice Indian curry, fish and chips or a trip to our local carvery. It's also nice to recognise that these days some French people actually have sweet smelling breath - untainted by garlic or "Gauloises".  This is a great improvement upon past times.

Yes it's great to have French visitors in my fold - even though they never leave any comments. As for my equally silent Russian visitors, I just want to say that getting Trump elected was in my view a very sick joke on your behalf. Mind you, your own cartoon leader Vladimir is a bit of a joke himself - baring his chest, riding horseback, invading Ukraine and belting pucks across the ice. Even so, to all my Russian visitors I would still like to say - "Благодарим Вас за посещение йоркширского пудинга!" which I hope means "Thank you for visiting Yorkshire Pudding!"
- February 06, 2017