The 45th President of The United States of America uses handshakes to assert himself and signal his dominance. Did you see the embarrassing way in which he squeezed and held on to Shinzo Abe's hand last week? It was quite disrespectful. Mr Abe was doing his best to pull away but the 45th President held on, beaming triumphantly at the cameras. 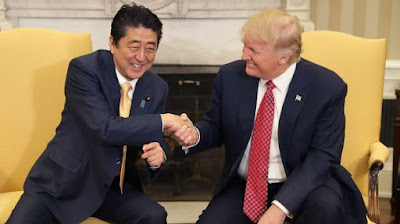 Some men are of the opinion that  a handshake should be so firm it's almost vice-like. Perhaps they see it as a way of signalling their manliness or their sincerity or like the 45th President - their dominance. Other men have weak and rather gentle handshakes so that the proffered hand feels like a limp lettuce. My own handshake is in between the two -  firm but not knuckle-cracking. I don't want to dominate, I just want to say hello - we are equal.

You need to be careful with overly firm handshakes as sometimes they can hurt the recipient. He or she may be slightly arthritic or they may have a ring or two on their fingers. They may have had a recent hand injury. Squeezing too hard could be painful.

Another tactic the 45th President employs is to use his spare hand to grip the receiver's arm as if to say, "We are shaking hands but I'm in charge here buddy! Make no mistake!" What at first appears to be a friendly greeting becomes a non-verbal interactive device, a tool of assertion.

I wonder what your philosophy is when it comes to shaking hands with others? 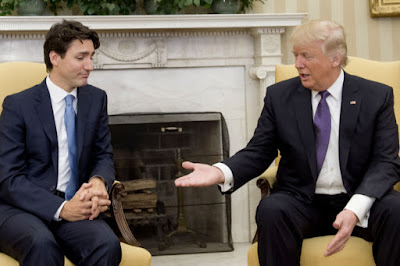