The title of this blogpost should be "Red Deer" but that would involve two words and since I embarked upon this blogging journey, I have only ever used one word titles. Anyway - Red Deer - not the four-legged creatures that roam about the Scottish Highlands but a town in the middle of the Canadian province of Alberta. Currently it has a population of just over 100,000 but back in 1901 when it was first given township status, it only had a population of 323.

The present citizenship mostly consists of white folk of European extraction (88.4%) and the next significant group are Métis people - descendants of First Nation inhabitants who mixed with the original white settlers (3.1%).

In just over a hundred years, Red Deer has established itself as the third most significant city in Alberta - after Calgary and Edmonton. It's amazing to think that such a short time ago it was little more than a river crossing. Now it has fifty schools, shopping centres, parks and industries as well as modern homes often set in spacious grounds. With all the greenery and trees you might say that Red Deer has evolved into a beautiful garden city.

Last week, I climbed aboard the Google Streetview car to cruise around Oldham, Lancashire but this week I am off to Red Deer to see what we can see in six equally random pictures snipped from Google imagery... 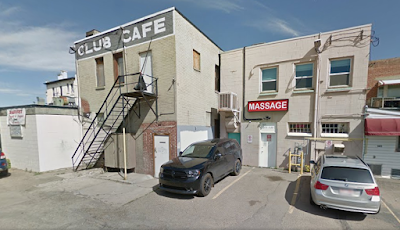 And finally The Club Cafe with its attached massage parlour. This
is known to be very popular with senior male members of the local
birdwatching fraternity... including Red from "Hiawatha House".
- February 23, 2017