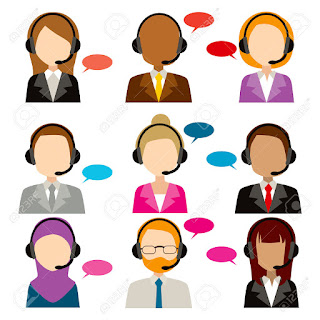 Recently, I have had to phone an electricity and gas  provider  called Scottish Power on three separate occasions. To begin with, you have to key in your account number followed by the hash key. Then you have to wait and wait, listening to banal music. Sometimes a recorded voice intervenes saying "Your call is important to us", "You are moving to the head of the queue" or "All calls are recorded for training purposes".

Finally, you get through to a human being sitting in a noisy call centre. There's a hubbub of voices in the background. You are asked to give your account number again and other information such as date of birth, email address, the four main blood groups and the capital of Outer Mongolia.

On the first occasion I phoned them, the call centre operative was a woman of Asian descent. I could tell this from her thick Indian accent. It was so pronounced that I could hardly tell what she was saying and I told her so - "I'm sorry. I can't understand a word you are saying. Please slow down and speak more clearly." I hope I wasn't being unwittingly racist. Of course, the background din didn't help.

On the second occasion I phoned them to sort out problems of their making, I got through to a Glaswegian gentleman. His accent was almost as impenetrable as the Indian lady's a few days before. To me it sounded as if Jock had just emerged from "The Sporran and Haggis" after a heavy drinking session and a full packet of "Woodbines". Fortunately, I was at university in Scotland where I gradually gained some understanding of the Glasgow accent. It is rather like a foreign language. After a few "Could you repeat that pleases", I managed to get through the call successfully.

This morning, after the customary long wait, I got through to a Russian call centre operative called Svetlana. I understood her more easily than the other two but it was still hard work. I was worried in case she had been visiting "Yorkshire Pudding" with other Russian and Ukrainian blogosphere observers. After a few minutes of fascinating banter about meter readings, the call reached a natural conclusion and I was able to thank Svetlana for her assistance. In her husky Siberian voice she asked, "Eez there anything else I can... help you with today Mr Pudding?" And for a moment I imagined riding with her on a sled pulled by huskies to an ice cave where we would drink vodka to the plaintive sounds of balalaika music before tossing our fur coats on the floor.

In some aspects of life I can be quite conservative and traditional. Is it wrong of me to expect call centres to employ people who speak English lucidly and intelligibly - preferably people for whom English is their first language? Furthermore, is it wrong of me to expect swift human response whenever I phone a company like Scottish Power? How come my time is so unimportant that they can squander it without apology or recompense?