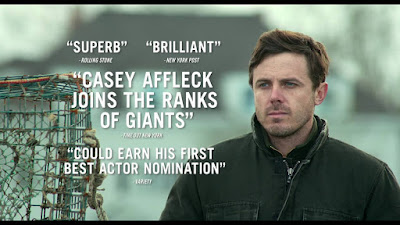 "Manchester by the Sea". What a wonderful film! Shirley and I went to see it as Storm Doris was arriving from the west. It was nice to be sitting snugly in a dark cinema as Kenneth Lonergan's masterpiece unfolded upon the silver screen and bad weather marauded outside.

The cinematography and the varied musical soundtrack were both brilliant - enhancing a painful story of loss and recovery. The central character is Lee Chandler played by Casey Affleck who bears a weight of sorrow. He had escaped Manchester to get a humble job as a janitor and handyman in a Boston apartment block. But initially the audience has no idea what brought him to this juncture. It takes a while for this to be revealed.

He is called back to Manchester by the Sea following the sudden death of his older brother, Joe. To Lee Chandler's horror his brother had  chosen him to be the guardian of his nephew - sixteen year old Patrick played by Lucas Hedges. Gradually learning to embrace this responsibility, Lee begins to claw his way out of the emotional hollow in which he has been residing.

Kenneth Lonergan has a short cameo role - rather like Alfred Hitchcock. He witnesses Chandler berating his nephew in the street and grumbles under his breath, "great parenting!" which causes Chandler to fly off the handle again.

I don't want to give too much of the plot away in case you get to see the film yourself. Suffice to say that as we emerged from the darkness of Screen Two, we encountered a couple we know and I was asked how I would score "Manchester by the Sea" out of ten. I replied, "Nine and a half" but on reflection perhaps I should have said ten.

Casey Affleck added subtle depths to his troubled role. He was often brooding, angry, self-absorbed, guilty or  wounded - endowing the role of Lee Chandler with human vulnerability and confusion. If he doesn't win the "best actor" award at this weekend's Oscars then something is terribly amiss.
- February 24, 2017