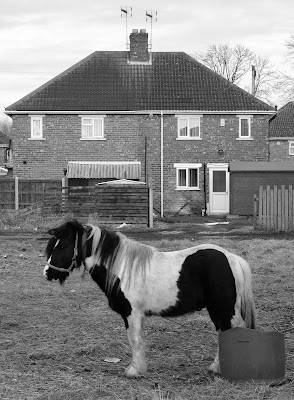 Today we met up with Shirley's sister and her boyfriend. They have been seeing each other for a good few months now. The only trouble is that he lives in The Channel Islands while she lives in a village near Selby, Yorkshire. We met in Thorne and enjoyed a pleasant lunch together in "The Punchbowl Inn". He seemed like a pleasant fellow and it is great that Shirley's sister has found him. Her husband died in 2011 so it has been quite a long time since she had a man in her life.

Afterwards, Shirley and I drove to the nearby settlement of Moorends. I had an idea that we might stroll to The Humberhead Peatlands Nature Reserve but it was a bit far. We passed the site of Thorne Colliery where there is now a solar farm. I find that rather ironic.

I am sure that there are many decent and happy people in Moorends but the place itself seems desolate and unloved. The houses were nearly all built by the local council or The National Coal Board. There's a dearth of trees but  plenty of litter, broken concrete and dog faeces. Two laughing yobs careered past us in the street on exhaust belching go-karts that were probably acquired illegally. On the main street there are basic shops and takeaways - the stuff of survival, not aspiration. This is the "other" England - forgotten, neglected. Just east of Doncaster, on the wrong side of the railway track.

Where Grange Road meets Northgate, a forlorn pony was tethered to a stake on rough wasteground. I wanted to release him and lead him off into the sunset and freedom but I guess he has an important role to play as the living symbol of Moorends. Poor thing. He looked at me through his unkempt fringe as if to say "What kind of life is this?" 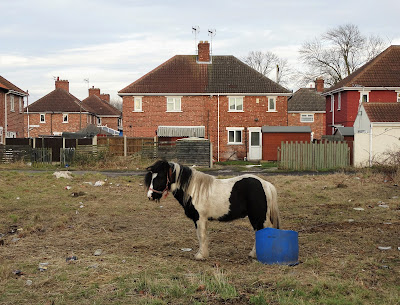