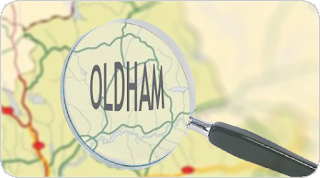 I wanted to begin this post with the following sentence - Last night I went to Timbuctu - but unfortunately Google Streetview vehicles have not yet been there. So instead I am going to begin this travel post with...

Last night I went to Oldham, Lancashire. Why Oldham, Lancashire? Because last year it was deemed to be the most deprived town in England. There may be other, more deprived communities such as Moorends in Yorkshire or Jaywick in Essex but as a whole borough or town, Oldham comes out on top... or bottom, how ever you might want to look at it.

My grandmother was first married in Oldham and I have been to Oldham Athletic's football ground to watch Hull City play. I also have a good friend who hails from Oldham but really I don't know the place at all.

In the nineteenth century, it became the most productive cotton spinning town in the world but today its textile industry has more or less died away. It sits just to the north of Manchester, home to 100,000 people, 27% of whom are officially classified as "Asian" which is a direct legacy of the town's historic  textile industries.

In 1900 it had the largest concentration of fish and chip shops in the world - one for every four hundred people and as we all know the tubular bandage was invented and developed in Oldham - a "vital contribution to advancing medical science".

But that's enough factual background. Let's have a look at six random picture of Oldham. Can we see visible evidence of the town's deprivation? 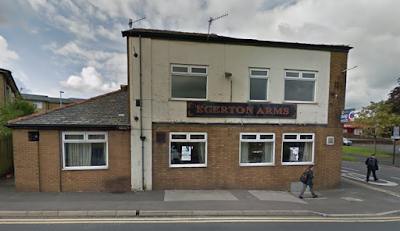 "The Egerton Arms" and Egerton Estate in the St Mary's area of the town below. This is believed to be the poorest neighbourhood in Oldham with 88.4% of residents claiming at least one kind of welfare benefit. 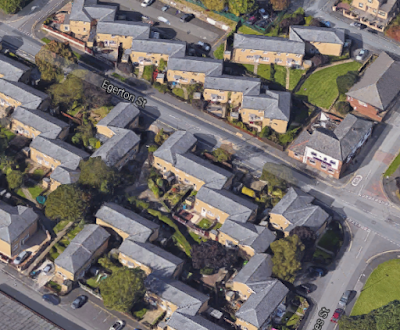 So there we have it. A little trip to Oldham. What I learnt from this exercise is that deprivation is not easy to spot. It's kind of hidden away behind closed doors and even in towns that are classed as being especially poor you will still find pockets of pleasantness - decent homes belonging to people with money in the bank and hydrangeas in their gardens.

Who knows where my next Streetview excursion will take us?
- February 20, 2017