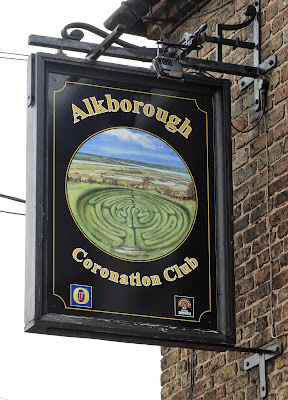 Yesterday, on my way to watch Hull City beat Swansea in The Premier League. I made a special detour to the North Lincolnshire village of Alkborough. It is situated on an escarpment overlooking Alkborough Flats and the confluence of the rivers Humber, Ouse and Trent.

The day was rather overcast so I must apologise for the dull quality of the accompanying photographs. One day I hope to return to take better, brighter pictures that do justice to Alkborough.

There has been a settlement at Alkborough since pre-Christian times. I imagine that the escarpment was a fine place for stone age folk to live - overlooking the river valley from hollows carved out of the chalky cliffside.

At some time in Alkborough's long history a strange  circular turf labyrinth or maze was created to the west of the village. The selfsame pattern may also be seen on the floor of the entrance to the village church which is dedicated to  St John the Baptist Church. During my visit, I also noted that the labyrinth design was replicated on the sign of the village's Coronation Club. 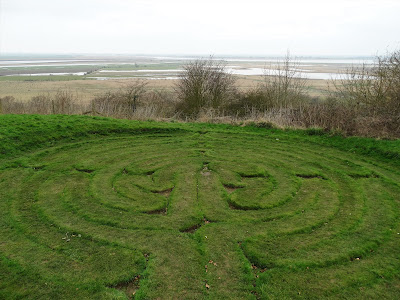 Locally, the turf maze is known as Julian's Bower. Legend says that Julius, the son of Aeneas, a Trojan warrior who appears in Homer's Iliad and Virgil's Aeneid, brought the idea of turf-cut mazes to Italy from Troy after it was destroyed by the Greeks.

Some believe that it was The Romans who brought the idea of turf mazes to Britain but other learned observers suggest that they were a medieval invention. Perhaps the labyrinth was connected with penance or possibly it had a leisure-time purpose - some sort of game or puzzle perhaps. No one is quite sure but surely the presence of the geometric design at the church suggests some religious connection. 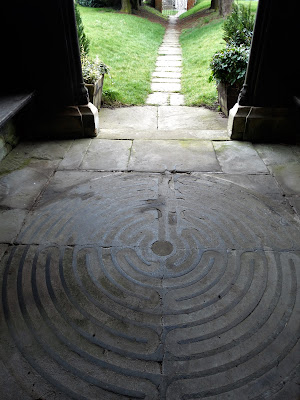 In past times there were many more turf labyrinths in Britain and other nations of north western Europe. To find out more, go here.
- March 12, 2017