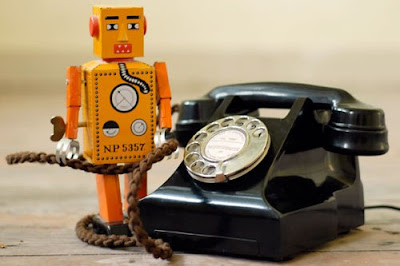 I pick up the phone.

Again nothing. Just an empty cave and the ghosts of electronic crackling.

There's nobody there because this is a typical robocall or what some people call a bot call.


I got one this morning at 8am and I received a similar call at a similar time on Monday morning. Generally speaking, I am a night owl. To use one of my late mother's expressions, you will often find me "raking around" in the early hours - painting foxes, watching "Democracy Now", reading books or blogs etc.. Consequently I often get up late  - around eight thirty or nine so you can imagine that  I am not at all happy about being disturbed by robocalls. After I have leapt out of bed to take the intrusive phone calls,, it is just about impossible to get back to sleep again. I wouldn't say such days are ruined but they certainly begin on a very unpleasant note having been deprived of my desired allotment of refreshing sleep.

It used to be that unsolicited phone calls and robocalls happened in the evening and it was rare to be hit by them in the morning but over the last few months I have noticed a growing incidence of morning calls. How long will it be before the scumbags who oversee these disrespectful systems start disturbing us in the middle of the night?

Please don't blame me. Like thousands of other people I am the innocent victim of robocalls. I have blocked several numbers and I signed up with the TPS (Telephone Preference Service) years ago. It's not my fault these calls keep coming.

You can't help wondering what on earth "they" are doing about robocalls. You know who I mean - telephone companies, governments, GCHQ, the FBI, The United Nations, the police, Interpol etc.. Surely in this day and age it should be possible to pursue the perpetrators of robocalls, rogue telemarketing outfits and other phone-line crooks - to stifle their unwarranted intrusions into law abiding citizens' lives.
- March 22, 2017