For some reason, I like the word "bellmouth". It is a technical term in the water industry to describe a massive stone plughole in a reservoir. In times of flood, the bellmouth allows water to overflow whence it is channelled to the original river valley beyond the dam. Sometimes dams are constructed so that excess water simply flows over the dam wall but where earth and clay embankment dams are concerned, the bellmouth method has been widely used.

The biggest reservoir near Sheffield is in The Derwent Valley. It is called The Ladybower Reservoir. Its construction was finished in 1943 and required the inundation of two little villages - Ashopton and Derwent. Physical evidence that they existed still lies below the water. Near the dam wall there are two massive bellmouths into which excess water plunges thirty metres before joining spillways that lead down to the course of the old river.

I took this picture of the eastern bellmouth in August 2012. As you can see the water level is well below the edge of the great stone hole:- 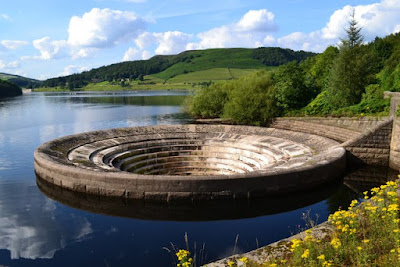 But on Thursday afternoon, water was cascading into the same bellmouth:- 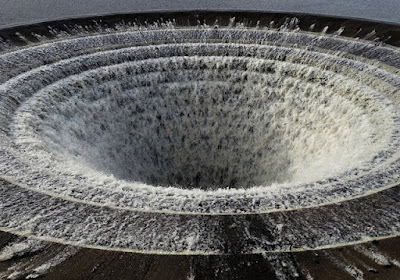 And this was the scene at the western bellmouth looking to one of the reservoir's two road viaducts:- 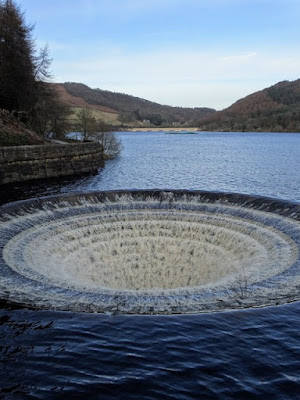 Yes, "bellmouth" is a good word but it is a scary proposition. Every time I stand by one I get the jitters, half-imagining plunging down to Hades. Just for good measure, here's another smaller bellmouth in the conduit that joins the upper reservoir at nearby Redmires but even that one gives me the willies:- 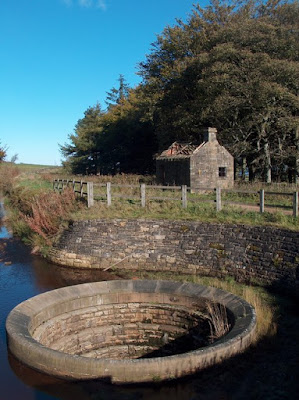 I think that "bellmouth" would be a useful term for certain human beings. People with big hollow mouths who in fact  have little of value to say. Numerous politicians and radio DJ's come to mind.
- March 04, 2017