This morning there's blue sky and sunshine but yesterday was rainy and miserable. I went to The Showroom to watch this year's oscar-winning best film - "Moonlight" directed by Barry Jenkins. The cinema was packed and irritatingly there was a fellow behind me who guzzled food and drink continuously during the first hour of the screening with associated sound effects. Damned annoying.

I wanted to be wowed by "Moonlight" but I wasn't. Admittedly, it had its special moments and some adventurous cinematography but in the end I was underwhelmed. The plot didn't grab my interest and I just couldn't warm to the extremely reticent and damaged central character - Chiron who we observe at three stages of his life.

No. It wasn't my cup of tea. I like films that absorb me - films I can get lost in so that when "The End" is reached I am surprised to return to everyday reality. That's how it was with "Manchester by the Sea" but not "Moonlight". Disappointing.

Shirley was away in Budapest with a bunch of women friends this past weekend. When I got home from the cinema, I baked a steak pie and then got on with my latest picture of Fred Fox. I had been planning to leave the background more or less blank but in the end I decided on a green background.

This is my fourth picture of Fred Fox. I keep learning techniques and do's and don'ts as I go along. There's a sense in which I am not fully in control of the picture I am painting. Each one has a mind of its own and what I visualise when I set off is never quite the same as what emerges in the end. Bedtime was just before 2 am as a gibbous moon was setting in the west. 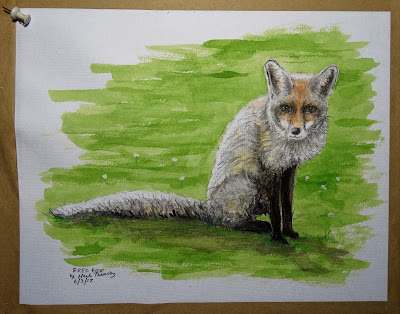 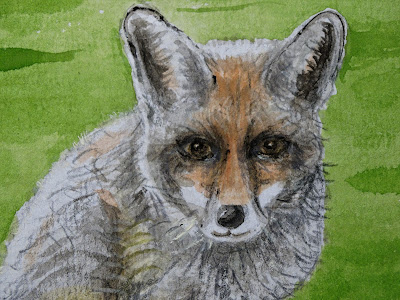