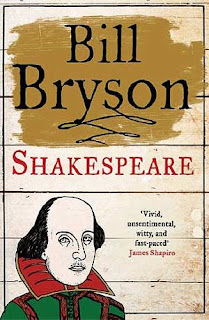 Please don't judge me but sometimes I like to drive out into the nearby countryside to find a quiet spot. There I will simply sit in my car for an hour or two and read which ever book I am on. I need silence and good light for reading - with no distraction.

Yesterday afternoon, I was parked up in a remote lay-by under Stanage Edge reading "Shakespeare" by Bill Bryson. Finally, I finished it! Hurrah!  It was, after all, a fascinating, readable and well-informed look at The Bard's life, claims that have been  made about him and the very small amount of evidence for his existence that remains four hundred years after his death at the age of fifty two.

Bryson scorns ridiculous notions that Shakespeare was in fact someone else like Francis Bacon or Ben Jonson or even Queen Elizabeth I, pulling these self-indulgent and spurious arguments apart, like dandelion seeds. The book finishes with this sentence: "Only one man had the circumstances and gifts to give us such incomparable works, and William Shakespeare of Stratford was unquestionably that man - whoever he was."

As I as sitting in my lay-by, another car pulled up behind me. I looked in my rear view mirror and noticed that the front seat passenger had a huge red ball on his lap - either that or he was heavily pregnant. 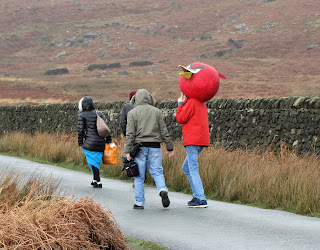 The occupants of the car - three men and a woman - clambered out with bags and coats etc.. Soon they were walking off along the drizzly country lane. It was then that I realised the red thing was actually a huge Angry Bird mask - you may have seen images of that popular computer game character.

They proceeded through a gateway and trudged three hundred yards or so across rough pasture to some rocks beneath Stanage Edge. As I had now finished "Shakespeare", I got out of my car and went over to the boundary wall with my camera. Using it's full zoom facility I snapped several pictures, including the two that follow this paragraph. What the hell was going on? Have you any idea? 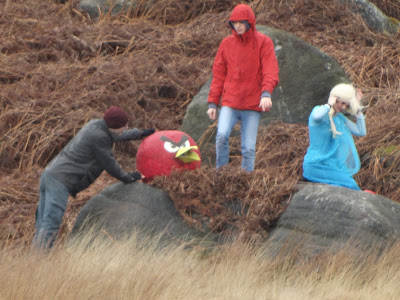 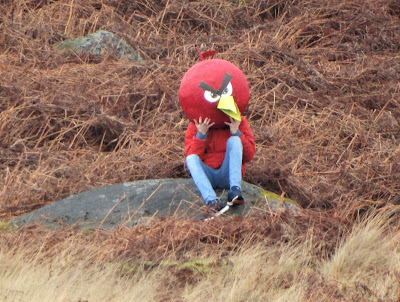 P.S. I have at long last  made an appointment at the local health centre to see a doctor about my gammy knee and have stopped putting artificial sweeteners in my tea and coffee after reading that there may be a link between regular use of aspartame and the development of arthritic conditions.
- March 20, 2017