Another bright weather forecast so a walk was in order. Sometimes it's nice to walk in more neglected areas where most Peak District or Yorkshire Dales weekend ramblers would never venture.

I headed south down the M1 to Junction 28. Instead of continuing on the A38 towards Derby I instead headed through the former coal mining village of South Normanton to Blackwell which also once had a colliery. Research brought this up - "Around 1900, a coke oven and a coke by-product plant were built next to Blackwell Colliery producing tar, coke and various chemicals. 'The fumes and smoke from the plant were horrendous, destroying hedgerows, grass and crops in the vicinity. It was impossible to have doors open or windows open when the wind blew the fumes in the direction of the houses."
Nowadays the pits have gone and the local communities have had to evolve. There are new housing estates and the old waste heaps have been levelled or grassed over. On my circular route I also passed a massive fenced compound that contained odd grassy mounds with flat tops. Later I discovered that the compound is owned by an explosives company and the mounds are used for testing their deadly wares. 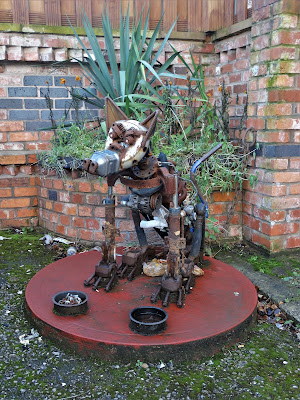 My walk took me back through South Normanton where I encountered a grizzled man with walking sticks. He had a khaki rucksack on his back and out of this two rolls of Christmas wrapping paper protruded. He had an angry, combative disposition and his breath smelt unpleasantly of stale alcohol. He showed me a small statue of a dog that a local welder had created just for fun. When my new friend sniggered that he was going home to masturbate I knew it was time to march onwards and I left him in my wake.
I bought a tuna and cucumber sandwich and a pint of milk from the "Nisa" shop where I had to listen to a shop assistant called Jane weighing up the merits of different brands of red wine they had on their shelves. Soon I  was consuming  my humble lunch sitting on an old gravestone slab in St Michael and All Angels churchyard.

Then onwards to the oddly named St.Werburgh's Church in Old Blackwell then back along the road that leads to New Blackwell where three hours earlier I had parked my car close to the flattened site of the old coal mine.
- December 19, 2017