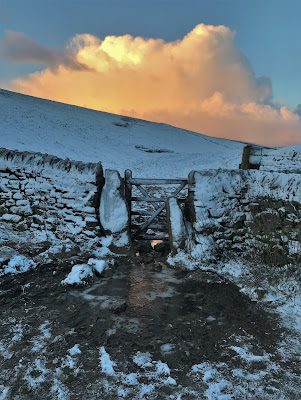 The Beloved Daughter was up very early yesterday morning. The Pleasant Boyfriend was keen to take a winter walk and see the sun coming up over The Hope Valley.

It was still dark when they set off in Shirley's little Korean car but I noticed a lightening in the eastern sky. (Please note the spelling - "lightening" and not "lightning"!)

I wasn't feeling well. That's why I was up to see them off. The urge to blow disgusting gunge through one's nostrils  into toilet tissue tends to disturb one's sleep.

At about eight o'clock, I was back in bed and managed to grab another hour of sleep in which I dreamed that I had deliberately sliced off my right foot with an ultra-sharp machete. Hopping around forevermore I was starting to regret the action when to my enormous relief I woke up from this disturbing dream, happily discovering that my right foot was still intact.

The Beloved Daughter isn't an athletic out-doorsy kind of young woman. When she is back in this house one of her favourite occupations is to curl up in her room and sleep so I applaud The Pleasant Boyfriend for getting her out in the countryside at such an ungodly hour on such a wintry morning.

In other news, bloggers from around the world are already flying into Manchester ready for the ninth Laughing Horse Blogging Awards Event. The Committee have finally released this year's widget which may only be reproduced by awards winners. Traditional seaside B&B accommodation will be free to all bona fide attendees because of generous sponsorship from The Welsh Tourist Authority. Here's the unique widget design:- 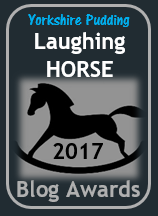