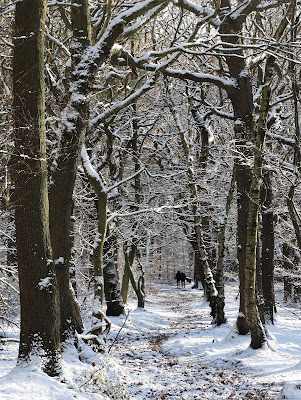 Less than two miles from this house there's an area of ancient woodland known as Ecclesall Woods. It covers 350 acres. Nothing has ever been built here apart from a couple of charcoal burners' huts but the woods have been "managed" since the middle ages.

I have walked there many times. It's very nice to see those woods in bluebell time which is usually in early May, But yesterday it was equally lovely to walk there as snow had turned the entire area into a winter wonderland.

Some people were out and about exercising their dogs. I said hello to one woman who had no less than seven dogs in tow and for some reason she replied with "Hello my love" but I couldn't remember any previous encounters with her so I was a little puzzled. Perhaps she says "Hello my love" to everyone she meets.

I snapped twenty photographs or more - trying to capture the essence of  such a beautiful winter's day. The picture at the top of this post was the best I could come up with. Those two faraway figures really make the composition in my view. Without them there would be no focus and no hint of a story. They also provide a sense of scale. Yes - I am pretty happy with that image.
- December 12, 2017