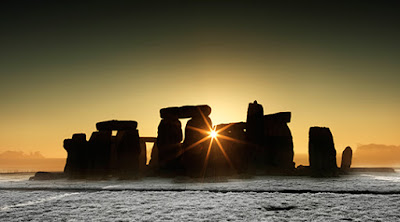 "And this light is for Midwinters past, present, and future. May we
learn, may we love, may we revel! Hail the Yuletide!"

This is a poem for heathens, pagans, humanists and atheists. It is perhaps worth noting that people have lived on the island of Britain for half a million years. Stories of Jesus of Nazareth only arrived here in the second century A.D. via The Roman Empire's  channels of communication. That's much less than two thousand years ago.

At midwinter we gathered round a burning log
Drinking flagons of ale as a roasting hog
Spat and sizzled in those lapping flames
As our children played their childish games
And we sang songs from long ago
As moonlight glistened upon the snow.
And green were the garlands about our door
Though the worst of winter lay in store
We knew that at last the darkness had turned
Even as the Yule log burned.

Christianity in the guise of Roman Catholicism requisitioned thousands of  ancient sites in the British Isles and built churches upon them. They sought to crush our ancient belief systems and cynically they purloined midwinter traditions, adapting them to showcase the fictionalisation of Jesus's birth. But the old ways were simply suppressed, not expunged.

The wheel has turned. This is the winter solstice. Happy Yuletide!
- December 21, 2017