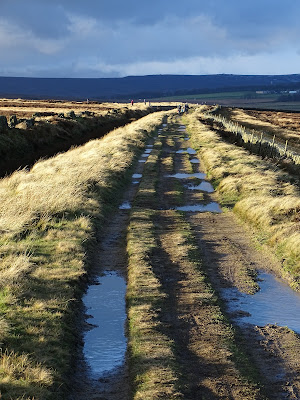 Boxing Day and along the moorland track there are people burning off Christmas calories. They are about to turn left and head over Brown Hill back to the Redmires reservoirs. But I am carrying on all the way to a remote moorland pool that I previously named Oaking Clough Reservoir. This name does not exist on any maps. I chose it because there is a small cluster of windswept trees  nearby called Oaking Clough Plantation. My rather unimaginative label is beginning to take hold - gradually being absorbed into the geographical lexicon. 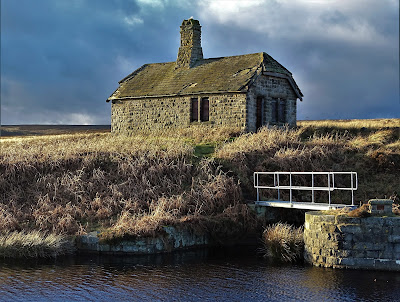 It's a place I have been to several times before. There's an abandoned building there which has two entrances and in each of the separate rooms there is a fireplace. Some visitors have suggested it was a small grouse shooters' cabin but my investigations lead me to the conclusion that the building was erected by a local  water board over a hundred years back. It overlooks the reservoir and the associated weir. I think it provided temporary accommodation for water board workers.

It is quite dry in the old building even though some roof slates are missing, It's pretty sturdy which it needed to be given its location high on the moors west of Sheffield. This might sound crazy but I have often thought of spending a couple of days there. 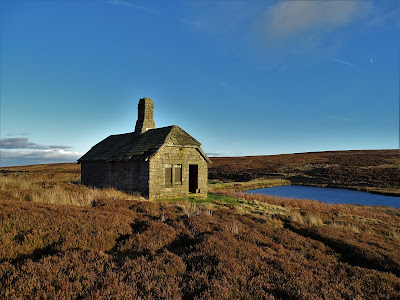 I guess it's just a fantasy... I would be curled up in my sleeping bag as the wind howled about the place and deep in the middle of the night I would hear the padding of a beast. An escaped  panther or a puma. My heart would be racing. It would sniff the air in the doorway and I would see its silhouette against starlight. It would bed down in the other room and in the morning it would be gone save for its unmistakable  footprints in the mud.

From the old building at Oaking Clough Reservoir I zoomed in on the highest residential building within the City of Sheffield's boundaries - Stanedge Lodge. It is situated at the end of a long private track and was built as a shooting lodge for wealthy grouse shooting parties. No one I know has ever been there. I would love to see inside it. 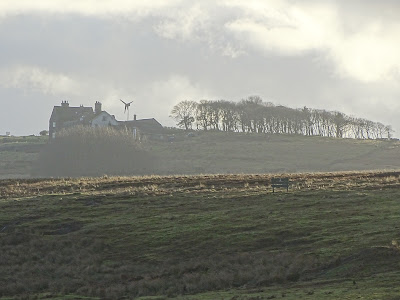 I headed homewards - glad I had brought my gloves but wishing I had remembered my thermal hat. My cheeks were reddened by an unforgiving Arctic wind. The gloom of dusk was descending and as I looked back along the track I thought I saw the outline of a beast - black and feline moving stealthily across the rough moorland, seeking shelter.
- December 27, 2017