Yesterday morning I tied Clint up outside "The Bull's Head" in Monyash. Snow had fallen over night and the Derbyshire landscape had a wintry Christmas card look about it.

As I donned my trusty walking boots, it crossed my mind that later on I might treat myself to a drink and a bite to eat in "The Bull's Head" when I got back. I zipped up my Hull City manager's coat and rooted around in Clint's bottom for my thermal hat and fingerless gloves.

First of all I had a bit of a wander around the Peakland village after realising that I had never seen its old church. Unfortunately the building was locked but I took this picture of St Leonard's from its snowy churchyard:- 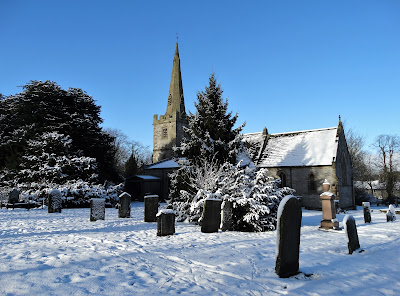 And then as I headed for Fere Mere - the village pond, I came across this little track. Conveniently, sunlight was spotlighting the rather unique wooden street sign:- 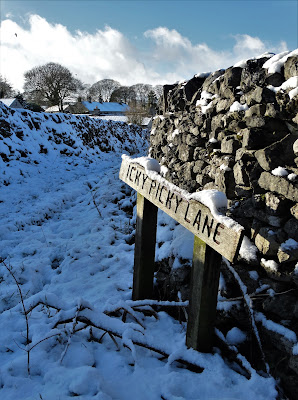 It was time to set off out of the village, across snowy fields and over ancient limestone walls - up to a long moorland track called Hutmoor Butts that used to connect the long abandoned Hutmoor Butts lead mine to the old Roman Road that links Buxton with Ashbbourne.

It was a mile to the main road and the going was hard with small snowdrifts amassing in the lee of the limestone walls. In one field a bewildered herd of young bullocks stood shivering, wondering where their grass had gone. 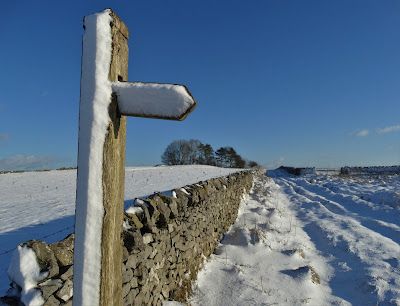 Twenty minutes later I approached an old farm hidden in a hollow. Its name was quite magical - The Whim. And close to The Whim a small flock of sheep thought that I was a farmer bringing them a welcome bag of food supplement. Instead of running away from me they ran towards me till I felt like the pied piper of sheep, leading them across their snowy pasture. The bolder ewes attempted to nuzzle my thighs and I had the feeling that if I fell over in the snow I myself would become sheep food. 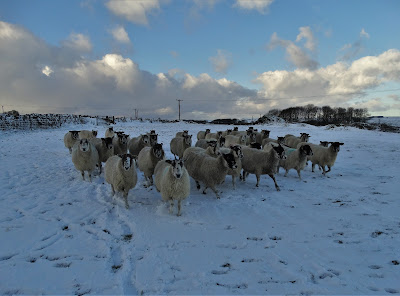 Two and a half hours after setting off I was back in Monyash. My boots were rejected in favour of shoes and I entered "The Bull's Head" where a log fire was roaring. Though it was now well past the end of food serving time, the landlady agreed to make me a sandwich and I also ordered a coffee. The sandwich seemed rather pricey at £6.75 but when it arrived I was delighted because it was accompanied by a substantial and tasty salad with potato crisps.

I fell into conversation with a lone woman who had walked six miles from Bakewell and would be walking back as soon as she had finished her leisurely lunch. Co-incidentally, she told me that her grandparents had lived at The Whim and she remembered the harshness of their simple farming life there. No electricity. An open fire with a kitchen range. No running water and an outside toilet with a cesspit. She was grateful to have witnessed the tail end of that basic yet very contented lifestyle.
- December 09, 2017