Yesterday bloggers from across the blogosphere arrived at The Westminster Hotel in Rhyl, North Wales. They were assembling for the ninth Laughing Horse Blog Awards Ceremony.
In the early evening, after freshening up in their rooms and donning their gladrags, the bloggers assembled in the hotel bar where beverages and light snacks were provided. It was a time to put faces to blogging names and titles.

For example, I had a merry time conversing with the legendary Sue from "Susan Here There and Everywhere". What a delightful filly but my oh my she could knock back the G&T's! We were interrupted by the equally delightful Jennifer Barlow from South Carolina. It was a pleasure to meet her. I wondered how she had got her pet parrot Marco through immigration. He was sitting on her shoulder - endlessly squawking vulgar words which I shall not repeat on this family friendly blog.

At bang on 7pm the buses arrived to take us on a seven mile inland journey to the famous Lost Village of Trelawnyd. It was here that the Ninth Awards Ceremony was to be held in the village's famous Memorial Hall which annually hosts The Trelawnyd Flower Show.
Upon entering the hall, we were politely ushered to our seats by Cameron the Teenage Boffin and Jason The Affable  Despot . When everyone was settled, the stage curtains swished open to reveal the entire Trelawnyd Male Voice Choir. They welcomed us with three traditional Welsh songs, including "Men of Harlech". North American bloggers were not the only audience members to be wowed by this magical performance.

"Magic!" yelled Derek Faulkner who was dressed in a smart tweed suit with tartan knee socks and brogues.

"That was so cool!" beamed my surrogate sister Donna from the mountains of Colorado.
Following the choral performance bloggers tucked into traditional Welsh fayre including Welsh lamb,  Welsh cakes, boiled leeks and bara brith which even met with the approval of the 2015 overall winner Ms Lee George from Queensland, Australia.

There was much laughter in the air as gallons of Welsh beers by Brains were being quaffed by the thirsty bloggers. Margie from Toronto, Maria and Rozzie were getting on like a house on fire - boldly harassing Jason the Affable Despot by slapping his buttocks whenever he brought more beer to their window table.

To my consternation, a fight broke out between two previous winners - Steve Reed and Ian Rhodes ("Shooting Parrots") over whether or not 2018 will be a leap year. I had to physically separate them as they rolled about on  the floor . By the way, the next leap year is 2020. Steve should have known that.

Taking a breather outside the hall, I was approached from the misty street by a Welsh goddess. At last I was in the company of the delectable Mrs Trellis. Initially, I was tongue-tied but  managed to request her autograph. She thrust me against the wall and ran her slender fingers through my leonine locks, whispering a husky invitation that I shall not repeat. Some things that happened in Trelawnyd must stay there.

When I eventually got back in the hall, the party was in full swing. Conga music was playing over the P.A. and most bloggers had joined the conga line as you can see below. I latched on to the end holding the ample rump of Jenny The Procrastinating Donkey. She was giggling like a schoolgirl. Then ADDY from London latched on to my own quivering hips. I was wishing she had trimmed her nails.

Even intellectual bloggers like Meike Riley (in a beautiful light blue silk dress), Graham Edwards and Robert H. Brague were in the conga line which snaked its merry way around The Memorial Hall till just about everyone was exhausted. 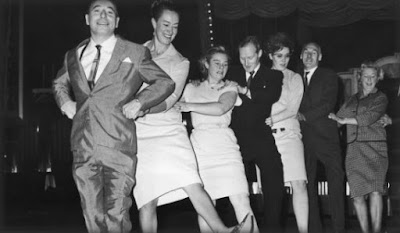 The authoritative Jan Blawat appeared on stage in a lacy evening gown bellowing into the microphone, "Shut the **** up and sit down! It's time for the awards! ...You too buddies!" she said targeting Jenny and Keith who had just arrived from Wrexham after getting lost on the North Wales Coastal Expressway. They had given the literary socialite Vivian Swift a ride from Manchester Airport following her unexpected delay. She wafted into the room throwing her vintage feather boa over her left shoulder.

Jan announced that owing to budget constraints only five awards would be presented for 2017. A ripple of surprise was transmitted around the hall and there were audible gasps from Libby and Briony's table. Briony was nimbly crocheting a table mat.

There was some ear-piercing feedback over the P.A.. Then Jan announced that Laughing Horse had highly commended three bloggers for services to blogging - Jennifer Barlow for "Sparrow Tree Journal", Pat for "Weaver of Grass" and Sue for "Susan Here There and Everywhere".

Overwhelmed, these three giantesses of the blogging word floated to the stage in their sparkly evening outfits to collect their Laughing Horse awards. Embarrassingly, Sue tripped on the stairs but soon regained her composure and graciously clutched her award.

"And now," said Jan. "We come to the highlight of the evening as we announce who will be the overall blogger of the year for 2017." Cameron the Teenage Boffin delivered a dramatic drum roll.  "Let me give you a couple of clues. He's a senior blogger. He is a birder and he is devilishly handsome! He blogs regularly and interestingly  and his comments on other blogs are consistently supportive and positive. It's none other than... Keith Kline!"

"Who?" said Pam from "Hilltop Homestead".

Everybody else was asking the same question.

There was loud hollering and wolf whistles as Red stumbled to the stage. Surprisingly, he was not with Lady Kline, his long-suffering wife who Red calls The Micro Manager. Instead, he had picked up a member of the Air Canada cabin staff called Martha on the flight over to Manchester. She was clearly besotted as you can see in the picture below:-
Red gave a funny, self-deprecating acceptance speech. Jan kissed his newly shaven cheeks and ushered him from the stage as the audience stomped and clapped with delight. It was one of the highlights of Red's long life and he vowed to cherish his award for the rest of his days.

Again Jan bellowed down the microphone, "Shut the **** up!" California style.

"I know some of you remain puzzled about why we brought the Laughing Horse jamboree all the way to North Wales this year - specifically to the home of  the legendary John Gray with his famous fifty shades!"


There was a lone titter from Jennifer's table.

"I know it is very disappointing to many of you that John is not here. However, he sent this note if I might read it....'As some of you know I suffer from agoraphobia. I had hoped to welcome you all to my village but I was overwhelmed by an indescribable panic. The Prof kindly decided to take me away for the weekend – down to his mother’s place in Broadstairs.'  and that folks is the reason he's not here in this hall that has witnessed so many wonderful summer flower shows under his devoted administrative guidance."
"Little did John know that the reason we chose Trelawnyd this year was to present him with The Laughing Horse Lifetime Achievement Award for Services to Blogging. In his absence may I suggest that we now rise and conga down to the corner cottage opposite the church. We will leave the award in his new kitchen and get to see his humble abode. We might even encounter Albert the cat though all the dogs are elsewhere this weekend. Mr Pudding! Please lead the way!"

And so I led our drunken conga out into the December night, across London Road and all the way down the lane to the famous corner cottage where Earl Gray normally resides with the famous Prof and the even more famous dogs. Albert had a hell of a fright.