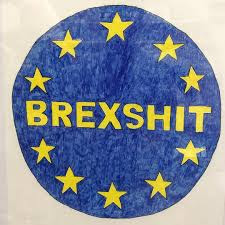 I considered a different illustration for this little blogpost but remembered that some visitors like to eat while they are wandering through the blogosphere. Because of the presence of electricity, barfing on one's keyboard can be injurious to health.

For the past three years, British newspapers have been filled with Brexshit tales. Brexshit this and Brexshit that. Most of us are heartily sick of it.

Half the British public were led up the garden path by those who advocated Brexshit. Increasingly, the pledges and promises that were made appear to be nothing more than fool's gold. Of course many people voted for Brexshit simply to cock a snook at David Cameron and the British establishment and undeniably - just as in the last American presidential race - there was shady Russian involvement

Some Brexshit voters were amazingly naive - such as one of Shirley's uncles who has since passed away. Back in 2016 I asked him why he had voted for Brexshit and he spoke of our country's independent spirit and how we had "won two world wars", claiming that we "don't need anybody else". As I say, he has since died - along with a million other retired Brexshit voters. In the meantime ,a million young people have now reached voting age.


Our beloved prime minister The Right Honourable Theresa May voted to remain in the European Union back in 2016. Her heart isn't really in it and the kind of Brexshit she plans to serve up is nothing more than a dog's breakfast of compromise, delay, tariffs and half-promises. It is an utter and complete mess and like many other British patriots I am very worried about what this will all mean for our nation's economic future. It appears like self-harming on a giant scale.

It's time to take stock - a reality check - but May and her mob seem determined to leap off the cliff - arguing that this is what the British people voted for. That is a patent lie. We need to stop the crazy Brekxshit before it's too late. We are part of Europe and we can never completely sever our ties with the European Union.

I am reminded of the last lines of "Hotel California" by The Eagles:-

"We are programmed to receive

But you can never leave!"