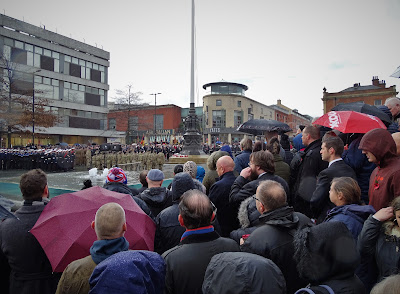 O God, our help in ages past,
Our hope for years to come,
Our shelter from the stormy blast,
And our eternal home.
Thousands of citizens descended on Barker's Pool in Sheffield city centre yesterday morning. We were there to commemorate the fallen heroes of World War One - a hundred years after that terrible conflict ended.

The sombre service proceeded and we reached a point where everyone was meant to sing the eighteenth century hymn by Isaac Watts - "O God Our Help in Ages Past...". The brass band played the intro and then bam - it was time to raise our voices and so I did. The only trouble was that nobody else in my section of the crowd was singing. Unexpectedly and slightly embarrassingly I was in effect singing a solo! 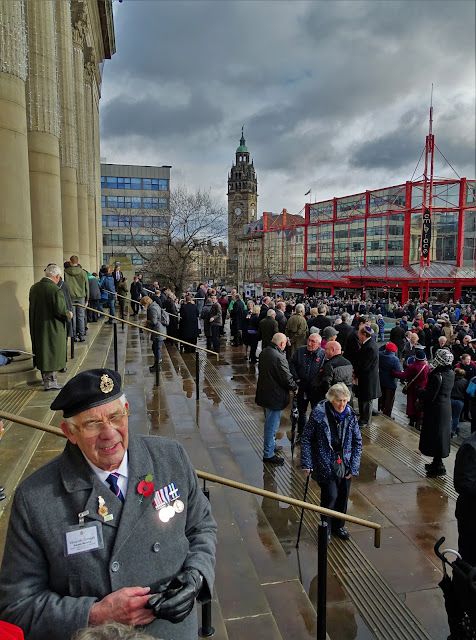 The woman next to me had a programme and it was open to show the nine verses of the hymn. I had begun so I couldn't just finish. I had to keep going and so I sang those nine verses at full volume thinking only of those who died in World War One. I was singing in their honour. At times my voice was tremulous with emotion.

When the service was over and the marchers had gone from the square, I felt a hand on my shoulder. A man who was a stranger to me said, "I just want to say thank you for singing that hymn so beautifully. I was really moved. I was standing just behind you. Thank you."

And I said, "I thought everyone was going to join in. Thank you for your kind words..."
Time, like an ever-rolling stream,
Bears all its sons away;
They fly, forgotten, as a dream
Dies at the op’ning day. 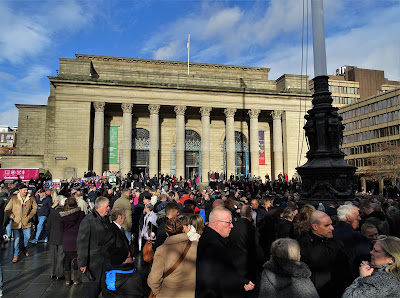