My silver companion, Mr Clint, was parked at the junction of Fullwood Stile Lane and Edale Road, north of the village of Hope.

"How long are you going to be this time?" said Clint with an undertone of irritation in his voice.

"About three hours. Maybe four," I replied as I pulled my boots out of Clint's rear end.

"I suppose I should be happy you've parked me here," he said.

"Well I can see some sexy European babes as they come across that bridge over there. Did you see that Fiat 500 that just passed by? The coffee coloured one?" drooled Clint. "She winked her left headlight at me."

"You dirty dog!" I exclaimed, reprimanding my lusty South Korean friend as I pressed the "Lock" button on my Hyundai keyfob and set off on another circular walk.
Up the narrow lane to Fullwood Stile Farm - crossing the railway track that traverses The Vale of Edale. Then I met the old Roman road that heads up the valley side to Hope Cross. 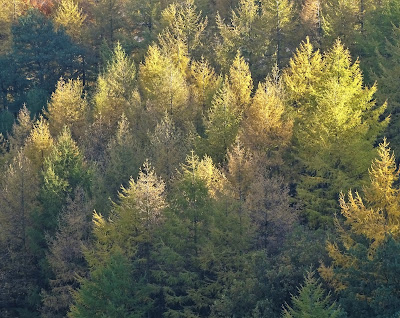 It was a long steady climb. The swathes of bracken - so vigorous and green in summertime  - had all turned golden brown like ripe tobacco. Occasional ragged sheep observed me plodding by. I was walking quite literally in the footsteps of Roman soldiers who had regularly tramped that little track almost two thousand years before.
How beautiful daylight can be in early November. I marvelled at my favourite valley down below - lovely Edale - illuminated like dream scenery - and beyond were the brooding moors that separate the east of northern England from the west. A toy train moved like an arrow on its way from Sheffield to Manchester.
Hope Cross marks an ancient moorland crossroad. Here drovers, jaggers, thieves and farmers rested a while in days gone by. I opened the nearby galvanized gate to allow two mountain bikers through before descending to Jaggers Clough. Then up again and then down the long diagonal track that leads to Clough Farm. Here I turned west by the little River Noe and enjoyed its wordless company all the way back to Mr Clint.

"Wake up! Wake up!" I called  for he was sleeping - zeds emerging from under his silver bonnet - or what Americans call a "hood". Funny that. I thought a "hood" was where dangerous fellows wearing gold chains and baseball caps hung about dealing drugs and suchlike while voicing indecipherable rapping lyrics. Yo!