Whitby is a special place. In my estimation. there is nowhere quite like it upon this planet. Home to some 14,000 residents, Whitby sits on the North Yorkshire coast at the mouth of the River Esk.

Standing atop the eastern headland there are the evocative ruins of Whitby Abbey. It was founded in the year 657 and became the most significant monastic centre in northern England. It accommodated both monks and nuns and the first abbess was St Hilda. She is associated with Caedmon - an illiterate cowherd - who miraculously received the gift of language and became a renowned Anglo Saxon poet. Along with Viking raids, the Synod of Whitby, Norman influence and Henry VIII's dissolution there is very much more that might be said about Whitby Abbey. 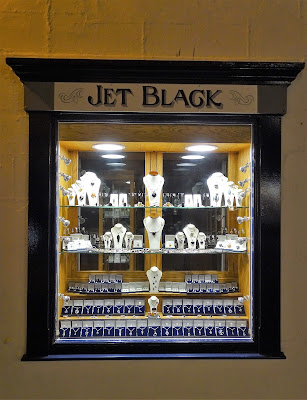 The section of coast upon  which Whitby stands is sometimes known as Yorkshire's Jurassic coast. Many large fossils of prehistoric sea creatures have been found in the cliffs along with many thousands of ammonites. In addition, it is one of the best places in the world for finding the semi-precious black gemstone known as jet. In the town there are several jet workshops and jewellers. Jet is essentially the compressed and fossilised remnant of monkey puzzle forests that thrived almost 200 million years ago. In her mourning for Prince Albert, Queen Victoria wore many items of Whitby jet jewellery.
Though Captain James Cook was not a native of Whitby, he came to the town as a boy and learnt to be a mariner - sailing on merchant ships around the British coast and across the North Sea to Germany and the Baltic. When he finally joined the Royal Navy, his career rose meteorically and he led famous eighteenth century voyages of exploration to  Canada, Tierra del Fuego, New Zealand and Australia before meeting his unhappy end in The Hawaiian Islands in 1779. Interestingly, his most famous ships - including The Endeavour were all built in Whitby.. 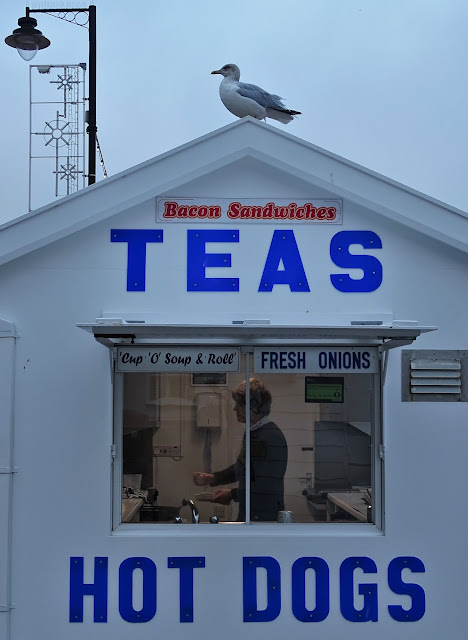 Whitby is also associated with the Irish writer Bram Stoker who stayed in the town in 1890. Its legends and its townscape are said to have inspired the writing of his famous novel "Dracula" which in turn spawned a whole horror industry. Linked to this, Whitby now has annual "Goth" festivals when black-clad weirdos arrive from all over the country and beyond to dabble in their black arts and eat chips on the harbourside.

Each summer Whitby hosts one of England's foremost festivals of folk music. Every available room is booked, campsites are filled and the town's many pubs throb to the sounds of sea shanties, laments, songs by Bob Dylan and self-penned ditties about love and loss as guitars are strummed and Northumberland pipes are squeezed.
Arguably, the very best fish and chips in the land are served in Whitby. Down at the harbourside there's the famous Magpie Cafe where Shirley and I had dinner on Thursday evening. On previous visits I have never made it into The Magpie because of long queues but there are several other great fish and chip eateries in the town.

There's so much more to be said about Whitby - from its whaling history to its artists, its seabirds and its salmon, from Charles Dickens to Theresa Tomlinson, from its storms bursting upon the harbour entrance to its legendary 199 steps... but I must not go on and on.

On Thursday night we fell into conversation with a smoker outside "The Duke of York" pub. He said, "It's not a place for religious folk you know. Whitby ends with -by. That means it's Viking not Christian." On the headland just above us the ancient abbey ruins prepared to endure another winter, another millennium. I don't believe that St Hilda or Caedmon would have agreed with him but then again my surname ends with -by so I am naturally drawn to that Viking theory. 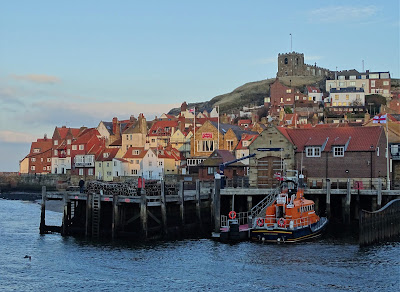