Hannah Hauxwell was an accidental media star and national treasure. She was "discovered" by a walker who strolled past her remote farm in North Yorkshire some time in the summer of 1972. Hannah happened to be out and about in one of her fields and soon found herself in friendly conversation with this passing stranger.

It was a meeting that would change Hannah's life because when that walker got back to Leeds he told a friend about the ragged woman he had met. That friend happened to work for Yorkshire Television and as they say - the rest is history.

On the day that the walker passed by, Hannah was living in dire rural poverty. She had land and she had a farm with outbuildings but she had very little else. The farm had no electricity and no water supply. She relied upon a nearby spring for water and a meagre supply of coal for her kitchen range. Her weekly income was around £5.

The rest of her family had gradually passed away years before and so she was left with Low Birk Hatt Farm in Baldersdale and all the responsibilities associated with running such a farm. She was more of a dreamer than a farmer and really struggled to make the place pay. She dressed in ragged clothes and ate frugal meals.  For a long time she couldn't even afford to own a farm dog because of the food it would need. 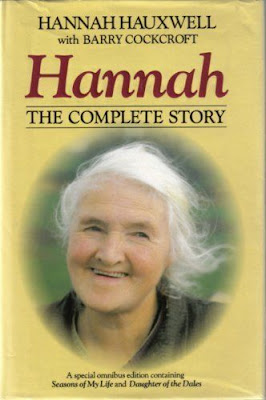 Though materially she had very little, she possessed a beautiful and radiant personality that for the next thirty years would disarm almost anybody who met her. She was honest, contented and not in the least bit resentful. She accepted her lot and was happy with it. She found pleasure in simple things.

A Yorkshire Television producer built two documentary films about life in the high Pennines around  Hannah Hauxwell and quite quickly she became an unlikely media star.  Viewers and readers admired her spirit and her kind heart. She seemed to represent precious and timeless values in a world that was already becoming technological, interconnected and chaotic. Modern people were already starting to lose touch with fundamental realities that were embodied in Hannah.

I know all of the above because I have just finished reading "Hannah: The Complete Story" though I can also recall  seeing one of those black and white TV documentaries in the early seventies. The memory of it stuck with me and that's why I bought my secondhand copy of the book when I spotted it at a Sunday morning car boot sale in Suffolk in September.

Hannah died in January of this year having reached the ripe old age of 91. She sold the old farm when she was seventy two and moved to a little cottage in a nearby village. She never returned to Low Birk Hatt believing that such a return visit would "unsettle" her.

YouTube version of "Too Long A Winter"  Hannah comes into the documentary just after the 16 minute mark. This is how she was first introduced to the British public.
- November 27, 2018