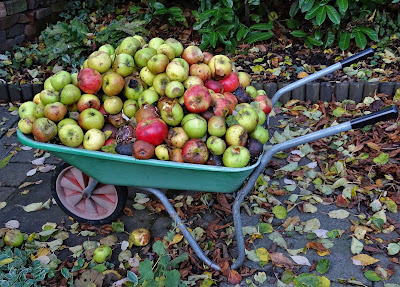 Situated halfway up our garden there is now a new art installation. I know that its title is rather wacky but we call it "Apples in a Wheelbarrow". It partly represents the fruitfulness of the earth. I collected all the the apples myself . They had fallen from our trees. In fact, I collected three full wheelbarrows.

After filling several jars with apple sauce, giving bags of apples away to neighbours and baking apple pies and apple crumble, we still had a mountain of apples to deal with. What was to  be done with them?

Then one day - as I was sitting on the toilet contemplating the meaning of life - I had a sudden flash of inspiration. Art! I visualised a wheelbarrow with apples piled up within it and that very afternoon I set about my task like Damien Hirst creating "The Physical Impossibility of Death in the Mind of Someone Living" back in 1991. But instead of a tiger shark, an aquarium and a vat of formaldehyde I had a wheelbarrow and a glut of apples. Small difference. Artists have to work with what they have got.

Though the new installation pays homage to autumn's fruitfulness, it also suggests decay. Within the pile, I deliberately included a number of very bruised apples that are already deteriorating - going mushy and brown like the soil from whence they came. 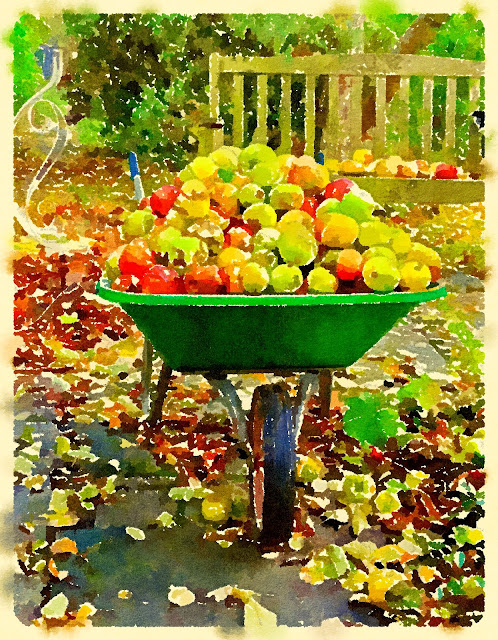 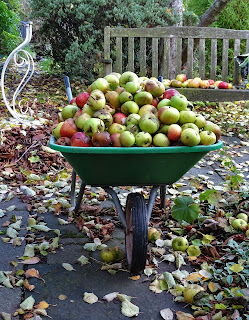