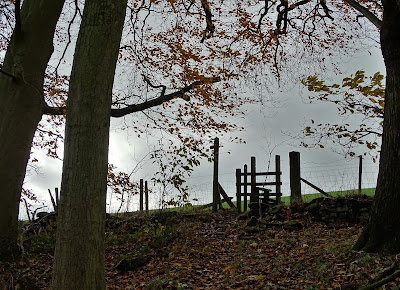 "Drat!" is a very mild expletive that I sometimes use when things go wrong. I guess it's better than using more earthy Anglo Saxon expletives that could easily cause offence to those of a sensitive or prudish disposition.

There were a few "drats" yesterday when I went out for another circular ramble in the nearby Peak District.

As some of you will have deduced from the many photographs I have taken on my multitudinous country walks, I am very much a fair weather plodder. I don't mind snow or ice but I need to see blue sky and sunshine to illuminate my pictures. This is why I keep a close eye on the local weather forecast.

However, yesterday the weather people got it wrong. Instead of sunshine broken by occasional clouds, there was a grey blanket overhead - like a big grey quilt smothering the earth and sucking colour and shadow from the world around me.

I abandoned Clint by the roadside in the village of Calver. He was not too unhappy as there was a foxy yellow Mini in front of him. "Haven't you gone yet?" he hissed as I slammed his tailgate shut and set off with left boot following right boot over and over again like a drumbeat.

I had taken the precaution of bringing  my oversized blue cagoule with me - the perfect item of outdoor clothing for making a memorable fashion statement.. However, in spite of occasional bouts of thin drizzle, I managed to avoid taking said item from my "Converse" rucksack.

Through woods and across fields, over stiles and along narrow Bramley Lane with not a single vehicle passing by. Then over the Bakewell road and up an ancient track to the moors above Calver and Stoney Middleton where hummocks and holes and random historical clues speak of the days when this plateau was exploited by lead miners and quarrymen.

It was pretty frustrating to be out in that grey day knowing that beams of sunshine would have created so many photogenic scenes for me to capture with my Sony bridge camera. 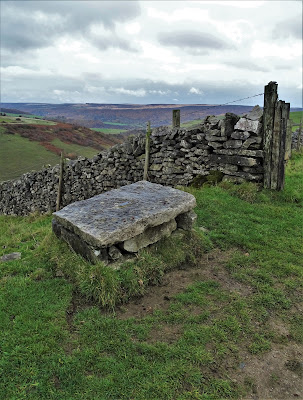 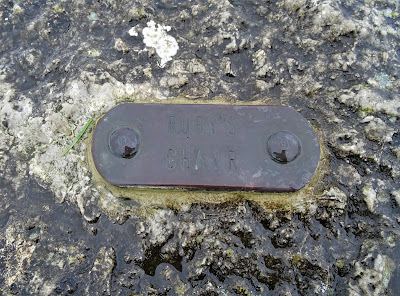 By an old gateway I noticed a squared block of limestone sitting on a rough plinth and  embedded in its top surface there was an old iron plaque with two words engraved - "Ruby's Chair". Who Ruby was and why she needed a "chair" like this I have no idea. Internet research has proved fruitless. I guess that on a sunny day the views from Ruby's Chair would be most splendid but as I say, yesterday was not a sunny day.

From Black Harry Gate, I marched two miles down the valley of Rough Side that merges with Coombs Dale and before too long I was crossing the A623 road and plodding back to Sir Clint of Calver.

Near the traffic lights there is a coffee shop called "Insomnia" and after stepping inside,  I treated myself to a large latte and a ploughman's sandwich which I enjoyed while seated at a corner table. Simultaneously, I  consumed another chapter of the book I am currently reading before heading home once again. This is life on the wild side - close to the edge. Well, Longstone Edge maybe.
- November 09, 2018