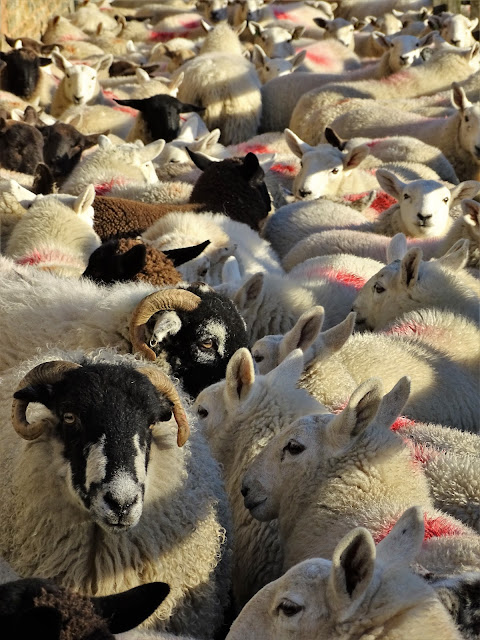 Let us return to Friday afternoon at Edale End Farm. Instead of crossing the farmyard, the fenced public footpath wound round the back of the farm buildings. I turned the corner and there were two hundred sheep corralled into this long confined area. It was only six or seven feet wide.

Yet I had my own dilemma. To proceed with my country walk, I had to progress through this ovine blockage to the wooden stile at the end. Momentarily, I pictured myself being trampled to death by dozens of  silently hysterical sheep. 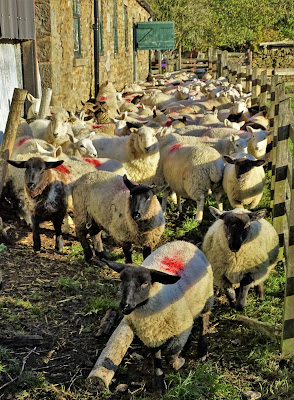 I edged closer to the flock and they squeezed up even tighter than before. There were a few "baas" but mostly it was a quiet scene. I sensed their flock mentality - thinking and acting as one - not like individuals. I hoped to stick to the fence and push my way along and then good fortune kicked in.

One of the old girls decided to make a dash for it - running past me to the empty part of the path I had just walked along. And when  she went another fifty sheep bravely followed. It was like squeezing toothpaste out of a tube.

The sheep did not speak. There were no leaders shouting, "Come on girls! Let's go!" Their escape choices were communicated telepathically. With three more of these sudden bursts, all of the flock got past me and you know - as they ran past - not one of those sheep touched me. I would have counted them but feared I might fall asleep.

Why were they there? I think the farmer had deliberately sealed them in the space pending some act  of animal husbandry. Perhaps they were about to be wormed or simply inspected but it all added a frisson of unexpected excitement to my peaceful rural ramble. And what is more - I lived to tell the tale!
- November 05, 2018