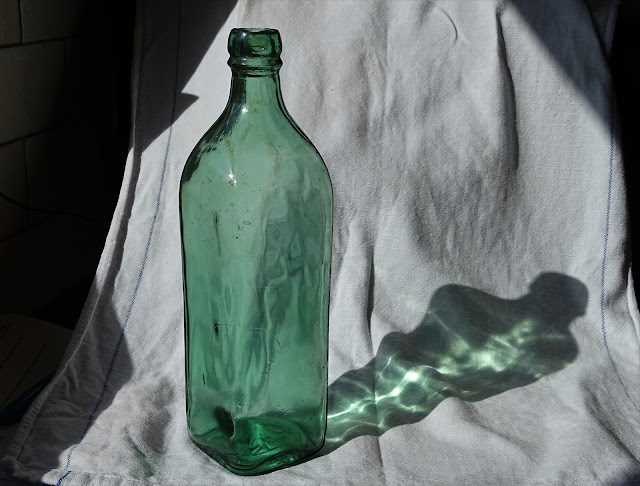 Back in September of last year I found an old bottle on the dried up bed of a depleted reservoir. I blogged about it here.

On Thursday, as I squelched through soft ground and mud to get my pictures of those arum lilies, I spotted another old bottle. It was just lying there, half-submerged in the boggy ground. I picked it up and brought it home.

Yesterday I cleaned it up with hot, soapy water. I was delighted with what emerged - a beautiful old green-tinged scotch whisky bottle. The glass is attractively imperfect. Lord knows how long the bottle had been lying there close to the arum lilies. It is not a place where people would often go so the bottle may have lain in that location for up to a hundred years.

You may perhaps have heard of the scotch whisky brand - Johnnie Walker. Well, before that name was adopted that particular fiery amber liquid was called  "Walker's Kilmarnock Whisky" - Kilmarnock being a town in Ayrshire, Scotland.

In the 1860's, the Walker family had the bright idea of using square bottles to assist in the storage and transportation of their whisky. Those bottles were mass-produced using cheap glass manufacturing processes. These green-tinged  bottles persisted for at least sixty years so I suspect that the bottle I found  was possibly thrown down in the 1920's.

Who discarded it? Perhaps a drunkard who had been drowning his sorrows or a pre-war toff who had been partying in nearby Whirlow Brook Hall. We will never know for those imagined whisky drinkers are already dead.

Glass production methods were much improved by the 1930's  and besides by then Walker's Kilmarnock Whisky was  known as "Johnnie Walker" with the famous striding man on the label.
- April 14, 2019