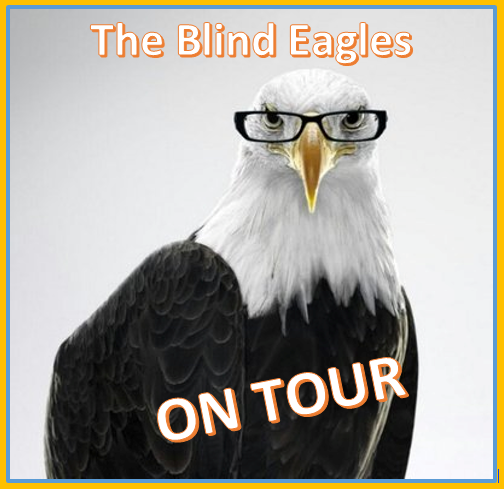 Last night saw the final gig of The Blind Eagles' blockbusting tour of northern England. I am writing this on the tour bus as our driver Red steers us back to Manchester Airport so that our North American backing singers - The Eaglettes can fly home.

The last gig happened in The Spa Theatre, Scarborough. We really nailed it!

There was Steve Reed churning out the bass lines like sleepers on a railway track - taking us steadily to some faraway hills and there was his partner Dave caught in the spotlight like Mark Knopfler from Dire Straits. He was inspired. John Gray beat his drumkit in the style of Animal from "The Muppet Show" - beads of perspiration shooting out like some kind of human fountain. God that guy knows to drive the beat.

The Eaglettes - Mary, Vivian and Jenny crooned in natural harmony, their figure-hugging sequined dresses sparkling like distant constellations. They really gelled on the tour - not just as singers but as friends too. Speaking as the lead singer and frontman, they gave me brilliant support. I couldn't have done it without you gals!

The Scarborough crowd were really up for it. News of our success had spread across The Deep North like a forest fire and of course our social media channels - including Twitter and YouTube had added much fuel to the conflagration. Thanks to Meike Riley and Jennifer Barlow for co-ordinating all that stuff.

I think we will all remember the tour for different reasons. That cheap hotel in Blackpool where Dave and Steve were caught snorting coke in the breakfast room by Elsie the fearsome landlady and the riot in Sunderland when waiting fans were told that the gig was completely sold out. The power outage in Grimsby and Red sleeping with all of The Eaglettes that memorable night  in the Travel Lodge just outside York.

Hey baby, it's all rock n' roll. "Carpe diem"  as they say. You gotta seize the day.

Meantime our first album "The Blind Eagles On Tour" is already charting at number one across Europe and The States. And I am proud to announce  that my original song, "Save The Earth" has been selected as the theme music for the new David Attenborough  TV series that will have the same name:-
Listen to the silence
Now that the birds have gone
Earth whispered long ago
There's no room for every one
Save the Earth
Save the Earth
Save the Earth
- April 27, 2019