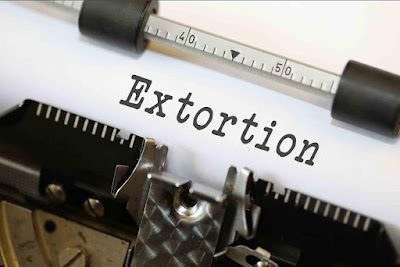 I don't know if it is the same in America, Canada, Australia, Germany or any other western country but here in England, insurance companies are engaged in widespread extortion. Let me explain.

You have paid for a year's house insurance. You have not made a claim and your circumstances have not changed. You are close to the end of the year and you receive a renewal notice from your chosen insurance company. You are somewhat taken aback because the new premium proposed is 25% higher than last year's premium. How can that possibly be right?

Many customers would simply trust their insurance company and pay the new premium. There's a degree of unwelcome hassle involved in complaining, querying or checking with other insurance providers. Living a busy life, it's easier just to pay up.

But that's wrong. My advice is to phone the insurance company and ask, "What's going on?". Why has my insurance gone up so much? Is there anything you can do to bring the premium down? Then you will no doubt hear a pattering of feet, you might be put on hold for a while and then the representative of the company will come back to you with a much reduced total figure. The whole thing is a despicable scam upon which the forces of government and the law should be clamping down.

At the end of March, our proposed annual  house insurance premium with The Halifax Bank had shot up by £35. Following a five minute call I got it down to a £12 increase - saving us £23 for exactly the same policy.

Yesterday, I received a renewal notice for my car insurance. The figure quoted was £65 higher than last year. I phoned the insurer up and managed to reduce the increase by £50. That's £50 in my pocket rather than the insurers' plentiful vaults. Once again, the policy is exactly the same as the one proposed. The only difference is the price.

When calling these sharks, it can be helpful to get yourself armed with an alternative quote from another company and to use this in fortifying your argument but often that doesn't seem necessary. It's as if the call centre operator's screen has flashed up this kind of message - "He has phoned up to  challenge the renewal figure so keep him waiting for five minutes and then reduce the figure using Formula A. Remember to make him think that we are doing him a big favour by saying - 'We can do this for you' etc.".

It all stinks like Grimsby Fish Market and I have little doubt that this widespread extortion by stealth is making insurance companies fatter and richer than ever before. Remember to phone them back and make a polite but firm challenge if you receive an overinflated renewal notice.