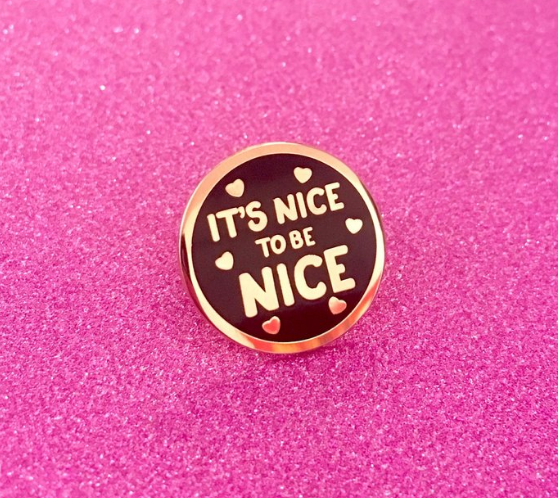 In my old Sheffield school, there was a senior teacher called Joe Lyons. He hailed from Northern Ireland and was The Head of Lower School. In this role he often had to lead school assemblies and I was witness to very many of them.

When addressing issues of misbehaviour, Joe would often revert to one of his stock sayings: "It's nice to be nice". After hearing him use it a hundred times, I came to appreciate that it is indeed "nice to be nice". People can be very good at criticising or knocking down but forgetful about the simple process of being nice to others. There's a lot to be said for niceness.

On Saturday night, I was in our local pub with my friend and former colleague Jonathan who now lives and works in Taiwan. As we were about to leave the pub, a middle-aged woman approached me. I recognised her because she had worked behind the bar a few years back.

To paraphrase as best I can, this is what she said: "I was just saying to my friends that when I worked here you were the one person who was always very nice to me. You treated me with respect without fail. I never said that to you before and I thought if I don't say it now, I might never say it. Thank you."

This was all most unexpected. I gave her a bear hug and departed. It gave me a rosy feeling. I had been boosted by her niceness.

Today, I had to take my sleek silver car Clint to the Hyundai automobile hospital because there was a problem with his heater blowing mechanism. For the second time in the past month I was dealt with by a young service desk receptionist called Lizzy.

When the job was done, Lizzy led me outside to show me where Clint was parked and that's when I asked for her name. I told her that when the online customer satisfaction survey came  through I would mention her.

"Because on the two occasions you have dealt with me you have been very pleasant, very polite and very efficient. I just want to sing your praises. It's not always like this when cars are taken to garages for work to be done."