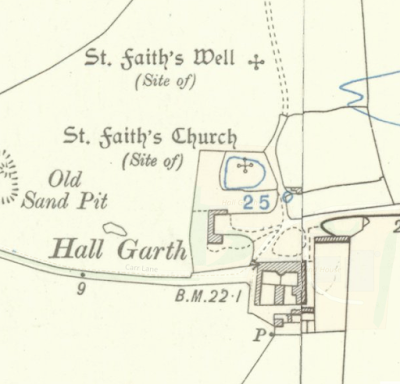 During my online research into the features at Brown Edge near Ringinglow, I swished the 1888 online map over to East Yorkshire and the village where I was born and raised.

Many hundreds of English villages with long histories cluster around the village church. Many of these churches are on ancient sites and the Norman or medieval churches we may see today are frequently built on grounds where wooden Saxon churches once existed.

Going even further back in time we can often work out that these Christian places of worship were preceded by sites of pre-Christian significance such as burial mounds, standing stones or holy wells from which life-giving waters rose up .

Now where I grew up, the imposing village church - Holy Trinity - was constructed as recently as 1845. It is bang in the centre of the village and definitely not on an ancient site. No - that is because the village's original parish church was a mile west of the modern village. It was dedicated to St Faith and was built next to the site of a holy well - St Faith's Well. Until yesterday I did not know its exact location in relation to the church site.

There's nothing to be seen of the well-spring any more. At some time in the past it was filled in and in the mid nineteenth century St Faith's Church itself was demolished. A few stone artefacts - including the old font were transferred to the new church. St Faith's graveyard remains in splendid isolation and rarely visited. To me it is a very special place. So peaceful. A place where long forgotten stories swirl. It was part of my childhood.

I close my eyes and imagine people of long ago visiting the holy well. The land would have been wooded then apart from low-lying carr land. The people would have paid homage to elemental forces, to pre-Christian gods and to water springing magically from the earth. And they would have gone home to their hovels feeling rejuvenated - happy to have given thanks, possessing little knowledge of the world beyond their horizons.
- May 11, 2020