In the vegetable plot at the top of the garden, our seed potatoes are now poking their leaves through the surface of the soil. Meantime, under the laurel bush and the apple trees one of our hosta plants is emerging magically once again. If slugs have hands they will mow be rubbing them with glee.

Up in Frances's bedroom six courgette seeds have finally germinated. They are the third group I have tried in small pots. The  two other attempts involved old seeds because The Great Lockdown of 2020 meant there was nowhere to buy fresh seeds. Well, that's not entirely true but where I did see seeds for sale all the vegetable seed packets had gone. When D.I.Y. stores were finally allowed to open ten days ago, I got to buy courgette seeds at "Homebase". I picked the most expensive ones and at the end of this season, I plan to save and dry some seeds after allowing one fruiting courgette to turn into a marrow.
Yesterday I proved I am a crazy fool by accidentally leaving my camera at home. I was off on a six mile walk at the northern end of Stanage Edge and it was only when I lifted Clint's tailgate near Moscar Lodge that I realised the camera was still on the bottom step of our stairs. Ah well - to tell you the truth it made a nice change to be out walking without the responsibility of capturing images. I saw the wonderfully-designed wing of a bird of prey left on a rock and I found a pair of brand new reading glasses on another rock.

Late in the afternoon, I two-metred in the queue outside our big "Waitrose" supermarket. I was there to buy my old friend Bert three special bottles of beer. Bert is 83 years old and he hasn't been out of his house in seven weeks. Fortunately one of his sons lives with him. When I called round with the beer, Bert was in good spirits and he was happy to see me.

Bert can remember V.E. Day back in 1945. There was a big party in his street in East London. He has an old  photo to prove it. There's little Bert grinning into the camera with a bun in his mitt.  How amazing that he is still with us for the 75th anniversary. His favourite song has always been "We'll Meet Again". I have heard him sing it a hundred times or more with a beaming grin across his happy face.

After our evening meal of fresh pasta, salmon and asparagus, I settled down to do a bit more research on the features I described up at Ringinglow. No solutions were found but here's a snip of the Ordnace Survey map of 1888:- 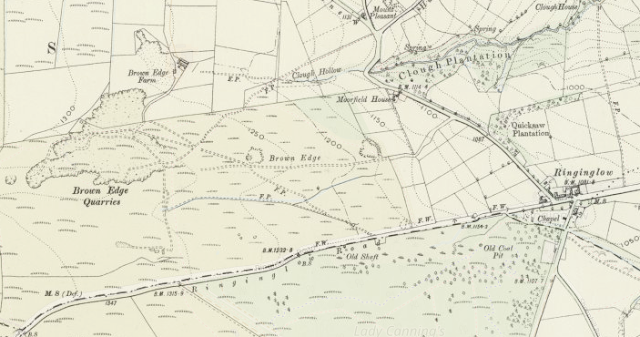 The mysterious "channel" is still there and so is the circular zone. I have read of an ancient burial mound beneath a large cairn west of Ringinglow though its exact location is today uncertain. Might it have been up there at Brown Edge? It's possible.

Sometimes mystery is more pleasing than explanation.
- May 10, 2020