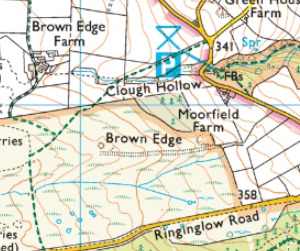 Just to the west of this city, near Ringinglow, I observed a couple of mysterious features in Ordnance Survey mapping. Bang in the middle of this snipped map there's a double banked channel and at its western end a curious circular feature. There is no suggestion in the map that this channel was connected with natural drainage from the moor.

I went to investigate and came away not much the wiser. It was hard to tell if the marked channel was connected with water. Perhaps it was a roadway. When it was constructed I have no idea. Perhaps it is ancient or it could simply have been made during the eighteenth century in connection with a big stone quarry that sits to the left. Can you see the "...ries"?  It's the end of "Brown Edge Stone Quarries".

This quarry was for the extraction and shaping of  stone roof tiles which were used widely in the region before much lighter and thinner Welsh slates were imported. At Brown Edge there was a big and uncommon outcrop of layered gritstone - perfect for roofing.

When researching the double-banked channel I thought it might have simply been a lane from the quarries but there's no reason why it should have been sunk into the landscape - no doubt after countless man hours of earth movement and digging. I am really none the wiser but I judge that the hollow was once a pond  because of a small conduit that cuts into the moorland depression.

History can be so slippery and in this instance I am not hopeful that any archaeological work has ever been undertaken to answer my questions. I will keep looking.