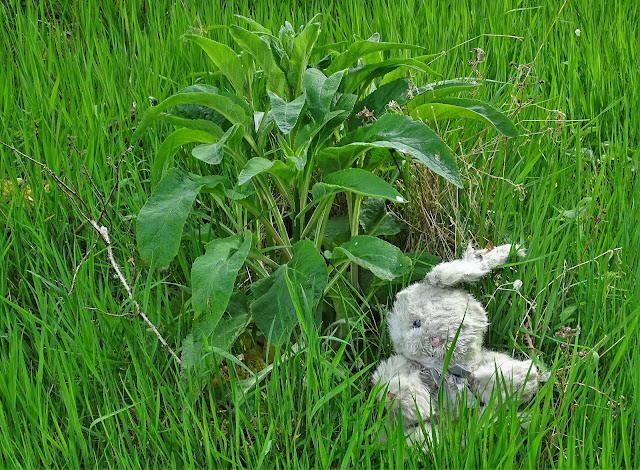 Yesterday afternoon, the neighbours on both sides were making too much noise for my liking. When I am reading books, I require silence so that I can fully concentrate.

Consequently, I had to wake Clint from his slumbers and drive out of the city - up to Ringinglow - just past the alpaca farm. I sat  at one of the two wooden picnic benches by Quicksaw Plantation and read two more chapters of "Yorkshire - A Lyrical History". The going is not easy. Plenty of historical facts and theories to take on board

Then I followed a mysterious path into the woodland. I had never ventured along it before. After a hundred yards, the path gave way to tangled undergrowth and the pathways of  badgers and rabbits. I came across an ancient badgers' sett though I saw no scat to indicate that badgers were sleeping underground but their well-trodden paths gave me hope. Perhaps they heard my boots on their ceiling.

Gradually,  further progress through the dense woodland became nigh on impossible without a machete.  And the ground dropped away steeply to my left - down into the valley of The River Porter. For once I did the sensible thing and turned back.

In a glade by a wild digitalis plant I came across a one-eared and one-eyed rabbit. How he came to be there I have no idea. See the top picture.

When I finally got back to the little car park on the edge of the woods, somebody called over to me from one of the picnic tables. It was my mate Mike and a friend of his called Danny - who I  have conversed with on several occasions. They were having a couple of beers and catching up so I joined them for half an hour. All being well, the three of us will meet up in the same place at the same time next week. I wonder if there are YouTube instructional videos that might help me to improve my small talk.
- May 20, 2020