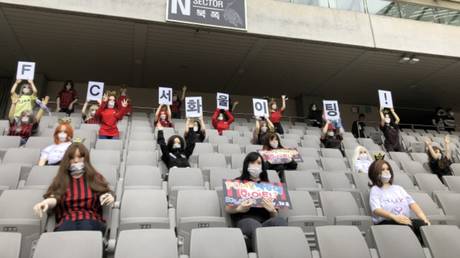 The powers that be are trying to start up football again.  Over the weekend, German Bundesliga  matches were played in empty stadiums. Here in England there is talk that we might follow suit in the next three or four weeks.

In South Korea, these "ghost games" have been happening for a couple of weeks. One club - Seoul F.C. had the bright idea of trying to manufacture a fake crowd so that their stadium would not appear totally bereft of supporters.

And now Seoul F.C. have been criticised for using sex dolls (see picture above).  In their defence, the club has protested that they are not sex dolls at all - they are "premium mannequins". Yeah -right!

If I had a "premium mannequin" I would call her Julie and keep her in my wardrobe behind the old suits that I never wear any more. If pubs ever re-open I would take Julie down to our local and order her a bacardi and coke before later heading home to watch "Match of the Day" together.

Just like Princess Diana, my wife might remark, "There's three of us in this marriage" before bursting Julie with a knitting needle.

I would bury her in the garden next to the young bullfinch I buried a couple of weeks ago. By the way, thanks to Mr Walter Baxter in Galashiels, Scotland for correctly identifying that bird. If you remember I had thought that it was a female chaffinch but Walter knows more about birds than I do - as the  hotly pursued women of Galashiels will surely attest.
- May 18, 2020