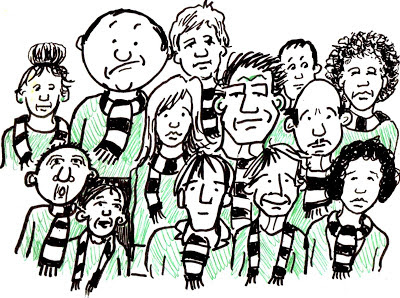 I came across this old doodle the other day. It reminded me of past times - when I was a member of my old school's Senior Leadership Team. It was created - if that is the right word - on June 29th 2009 at yet another SLT meeting, less than a month before I was to take my leave of a place that had eaten up twenty two years of my life. Towards the end, I felt quite distant from those meetings in which the players made moves as if in some educational X Factor competition though the atmosphere was usually and rather oddly reverential. Missionary zeal and all that.

Doodling is something I have almost always done. Like walking in the countryside, it can help some of us to focus and organise thoughts. Not everyone's brain is scientifically bullet-pointed into neat checklists and action plans. I'm very glad I took early retirement when I did, leaving those interminable meetings behind and the endless spreadsheets, the observation programmes, glossy government ring binders, the targets and all the other stuff that got in the way of the simple business of teaching kids. It's taken a while but three and a half years down the line I feel I have cleared away most of that psychological debris.

On the whole, the football supporters in my old doodle look rather glum don't you think? Hopefully Hull City fans won't look that way after the Leeds United game on Saturday! We'll be grinning from ear to ear, won't we?...And it's a little hard to believe that a week today I'll be high above the clouds, flying back to Thailand.
- December 27, 2012