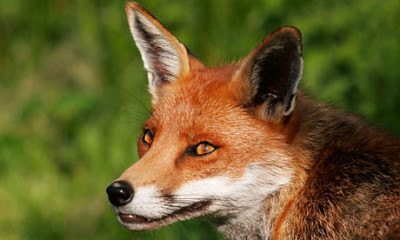 We have lived in this humble 1920's semi-detached house in the suburbs of Sheffield since 1989. When we first moved here, I swear we never saw any urban foxes. I recall a snowy morning several years ago when I was munching toast and gulping tea before setting off to work. I looked out across our white garden wondering how difficult the forthcoming drive to Parson Cross would be when I saw a nose protruding from our privet hedge. Then he stepped forward.

It was a fox, an urban fox and he saw me looking out at him before he tiptoed over the snow. It was one of those moments when you just wish you had a camera in your hands and that image of the fox peeping from the hedge amidst the white stuff imprinted itself in my mind's photo library.

In the last ten years, sightings of foxes in our neighbourhood have increased. At night I'd occasionally see flashes of these cunning creatures disappearing behind parked cars but for the past year, when returning from the local pub, I have regularly seen a certain bold  fox  who comes within ten metres of me and doesn't seem particularly alarmed. On a few occasions, I have tried to coax her to me with the sort of pursed lipped noises I once used with our pet cats. She looks at me and seems tempted - often stepping forward a metre or so before thinking better of it and running away.

On Saturday, I had been to do some shopping at "Lidl" on Chesterfield Road. Turning into Gisborne Road on a bright November afternoon, I had to pull over to the kerb because something was going on at the next road junction. Two healthy male foxes were having some kind of stand-off, right there on the tarmac. There was a sort of territorial supremacy dance with furtive glances  up and down the road. I watched them for three or four minutes before another vehicle drove past and they disappeared down garden paths. It was the middle of the day.

Then yesterday, after I'd spent a couple of hours on garden duty, I thought I'd try yet again to light the soggy bonfire I built in September. It was five o'clock but already dark. The fire was beginning to crackle and I was keeping my fingers crossed that this time it might really catch. Then I saw something move on the other side of the bonfire - just two metres away. Instinctively, I yelled out threateningly - "Grrah!" before realising it was a big dog fox - perhaps one of the streetfighters I'd seen on Saturday. In the flickering firelight, he just looked at me as if to say - "Who the hell are you?" then he padded over to my little bamboo grove under the apple trees where he appeared to cock one of his back legs.

I just stood there quietly watching. I thought he would disappear through the hedge into next door's garden but gingerly he came back to check me out. For a moment I had an eerie premonition that soon I would be physically fighting off a bold and hungry fox - wrestling him on the ground and trying to get my hands round his foxy throat as he tried to chomp chunks of meat off me. But it didn't happen. I stepped forward and he backed off. The little coward! Mind you, I have been told before that I don't taste very nice - though possibly, I might have simply outfoxed him.
- December 03, 2012