Man cannot live on bread alone so last evening Lady Pudding and your esteemed correspondent duly attended The Crucible Theatre for a dose of culture. This was not in the shape of Ronnie O'Sullivan and  John Higgins knocking snooker balls over green baize but in the form of a rather engaging play - "The History Boys" by Alan Bennett which is co-incidentally set in a Sheffield school.

A group of talented grammar school boys are being coached to get through the tough Oxford and Cambridge entrance exams. Their education has been enhanced by an eccentric English teacher nicknamed Hector and in this production played by the well-known British TV presenter - Matthew Kelly. He locks his classroom door to keep out intruders and teaches not from some dry syllabus but from the heart. The boys appreciate his eccentricity and run with his uplifting ideas but occasionally they have to pay a price by riding pillion on Hector's motorbike - fully expecting that he will grope their loins whilst in transit.

The play is a mixture of wisdom, dry humour, angry protest and bawdiness. It's hard to convey a sense of such a dramatic pot-pourri but here's Hector on reading:-
The best moments in reading are when you come across something - a thought, a feeling, a way of looking at things - that you'd thought special, particular to you. And here it is, set down by someone else, a person you've never met, maybe even someone long dead. And it's as if a hand has come out, and taken yours.
And here's one of the students, in an art-appreciation session, discussing the nudes of Michaelangelo:-
These aren't women. They're just men with tits. And the tits look as if they've been put on with an ice-cream scoop!
And here's Posner in conversation  with the new history teacher - Tom Irwin:-
Posner  Do you ever look at your life?
Tom Irwin I thought everybody did.
Posner I'm a Jew... I'm small... I'm homosexual... and I live in Sheffield... I'm fucked.

Matthew Kelly did surprisingly well and the young men who played the scholars supported him very ably showing a range of talents including singing and dancing as each actor defined a distinct personality. There were many funny moments and after sustained applause at the end of the show, Kelly stepped forward to urge theatregoers to actively support a nationwide campaign to save local theatres. It was an impassioned plea in harsh economic times.

We left the theatre at 10.45 and walked down to Sheffield Hallam University students' union building. We gave friends Cathy and Ann a lift back to our city's sprawling southern suburbs and all was well with the world. Sometimes you don't have to squirm and shake your head at the bitterness when receiving your healing dose of culture. 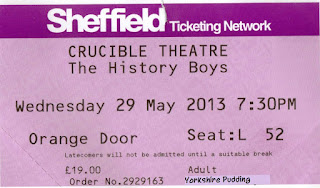