Some things you just cannot make up. Only yesterday, I related recent news about the two young thieves who robbed me in Thailand in March. I was becoming a little anxious that I hadn't heard any more from the Thai police but then just this morning I received a follow-up email from one of the policewomen I met in Ayutthaya when making my initial statement. It seems that the two young robbers are already in jail and it also seems that they were captured when - on April 17th - an attempted robbery from a Polish tourist went wrong.

Now we come to the comical bit. I am sure that any British coppers sending out "official" emails to victims of crimes would do so from official police email addresses. In Thailand, this is apparently not the custom because the policewoman who contacted me did so from her personal Facebook address. Clearly, because she is Thai with a no doubt long and unpronounceable name in Thai script, she has adopted an Anglicised pen name for Facebook. What is it? Penelope Plod? Lacey Cagney? No - I kid you not - she calls herself  Pumpim Hotlove! Yes - Policewoman Pumpim Hotlove. Any male criminal (and some female) would surely happily hand himself in to a policewoman  with such an appealing and promising  name. Why can't our policewomen have names like that instead of PWC Marcia Higginbottom or PWC Lettice Blenkinsop?

But may I say in conclusion that, back in March, Pumpim Hotlove was very professional and sympathetic when she dealt with my complaint so if you have, by accident, arrived at this blogpost Miss Hotlove, please accept my thanks for all your efforts in the name of justice. 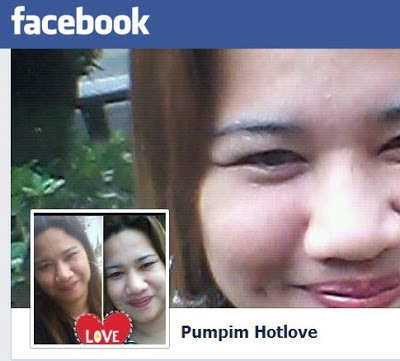