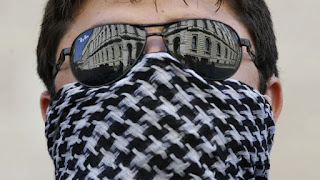 The BBC News this morning...

Up to 600 Afghan interpreters who worked alongside British troops are to be given the right to live in the UK, government sources have confirmed.

May I be so bold as to raise my little snout above the parapet to say - No! I don't think that's right. What do you think?

To begin with, we should never have followed America into these misguided, ultimately pointless and deadly adventures in Afghanistan. They have dragged on for twelve long years now and 444 British military personnel have been killed. What for?

It's obvious that to function in Afghanistan, our forces needed local support in the form of interpreters. No doubt these men and women have already been handsomely remunerated and no doubt either that when they signed up to help, it was never part of the deal that they'd have free passage to Great Britain if the conflict ever ended.

Six hundred interpreters! But of course we are not just talking about that six hundred. We also have to take into account their spouses, children, parents etc.. They'll get a big leg up with regard to flights, housing, benefits and settlement and they'll be absorbed into our society. The cost of all of this will be like a huge slap in the face to all those needy native British citizens who are struggling to get by.

I hope I am not beginning to sound like Nigel Farage but I think I speak for the vast majority of ordinary British citizens when I say it is time to paint the word "Full" in big bold letters on the white cliffs of Dover. I'm sorry but just because these interpreters assisted our military adventures shouldn't mean they get to live in Britain! I don't see the connection. If that wasn't spelt out in the first place then resettlement packages shouldn't even be close to the table.

Who'll be next? The Afghan police we have trained? The drivers? The suppliers? The traders who sold our soldiers fruit and souvenirs? The Afghan soldiers and bomb disposal experts who have been trained by us?

The chattering politicians in Westminster and the do-gooders and journalists who surround them like flies are completely out of touch with ordinary people's views on such matters. Will Cameron, Clegg, Ashdown and Osborne have Afghan interpreters living next door to them or in the flat above? No they damned well won't. And they won't have to teach their kids or treat their ailments or find them suitable accommodation either.

The only exception I would pause to consider is where there is hard evidence that a particular interpreter's life is clearly threatened by the Taliban or its supporters. But anyway, I thought the result of these deadly adventures was that we'd be leaving behind a new Afghanistan - a democratic Afghanistan with liberty and justice for all! What do you think?
- May 22, 2013